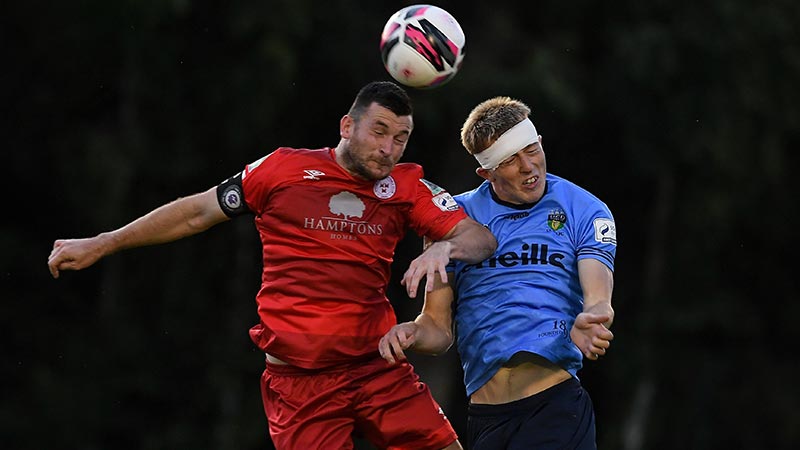 In an entertaining and attacking game of football, at times a feisty affair where both sides traded yellow cards and UCD had a defender off to bandage up a clash of heads, a draw was the fairest result.

Shelbourne started really strongly but failed to capitalise on first half dominance while UCD couldn’t convert their chances in the second half, in large part due to some outstanding saves from the young Jack McCarthy in goal.

As both sides valiantly chased a goal that would prove to be the winner, it was a game where defences won out tonight.

Despite missing a number of regulars, Shelbourne dominated the early stages of the first half. Shane Farrell struck over the bar for the north Dublin side, in the opening stages.

Harvey O’Brien had UCD’s first clear cut chance when he headed into the side-netting. Then, UCD had a really great chance in the six-yard area when the Shels keeper, McCarthy spilled the ball in the six yard box, and after a bit of head tennis, Liam Kerrigan headed wide. McCarthy, still an under 17 player; made two great saves in the first half from Kerrigan and Doyle.

Lunney was active in the first half, pinging passes out to Ledwidge on the left, whose cross went over the bar. Dayle Rooney beat the offside trap and he ran through on goal, but his cross into the area was tame and defended well.

The front three men did pose a threat to the home side and Lunney later almost played in a great pass to Rooney who couldn’t control it.

There were signs that Shels were dangerous but couldn’t quite open up the home side. Brian McManus in midfield was very impressive in different stages of the match and was unlucky not to score, with two excellent headed chances in the penalty area.

Michael O’Connor had a good shot over the bar, after being set up by Rooney and Ledwidge, who were a constant thorn in the side of UCD.

However, despite Shels overall dominance, UCD could and probably should have won the match in the dying stages when Kerrigan dribbled skilfully down the right side and crosses for sub Lennon to shoot. However, he couldn’t beat the magnificent McCarthy in goals.