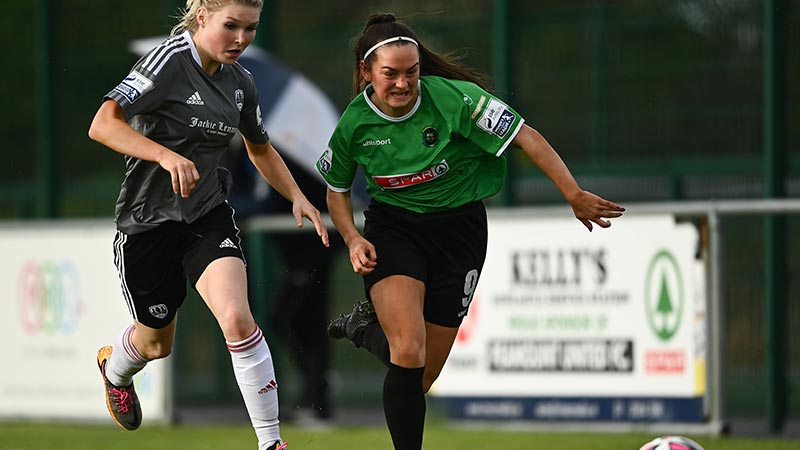 Peamount United's unbeaten start to the season continued after they overcame a dogged Cork City in Newcastle.

The 2020 champions were made to work hard for their victory, and they took the lead in the 14th minute with a goal from Eleanor Ryan-Doyle, who picked up a ball from Lucy McCartan and blasted it home.

Cork came back into the game and deservedly drew level at the break when Eva Mangan reacted quickly to a rebound from a corner to blast it home.

Peamount's class shone through in the second period though as they were able to reclaim the lead through another Eleanor Ryan-Doyle goal on 70 minutes, before Aine O'Gorman wrapped up all three points with a superb goal eight minutes from the end.

Cork often made life difficult for themselves, especially in the early stages of the first half when they tried to play the ball out from the back, but Peamount’s high press stripped them of possession high up the field. The most telling of these came after 10 minutes when a loose ball was picked up by McCartan, whose shot crashed off the bar from the edge of the box.

The home team wouldn’t have to wait much longer to go ahead as Eleanor Ryan-Doyle picked up a sumptuous pass from McCartan to slam it home.

Peamount continued to control possession for large periods of the first half, but they were hassled and harried by Cork, who fought desperately to get back into contention. They got their just reward close to halftime when Sarah McKevitt’s shot was deflected out for a corner, which Mangan was able to drive home to draw her side level.

The second half saw end-to-end action as both sides threw the kitchen sink at each other in search of a winner. Cork should have gone ahead after McEvoy was in one-on-one with goalie Naoisha McAloon, but she could only drive her effort straight at the Peamount shot stopper.

However, Ryan-Doyle and O’Gorman proved that quality always shines through with two great goals to give the hosts a win which ensures they will stay on top of the table for another week at least.