Ireland held at home in U21 first leg play-off 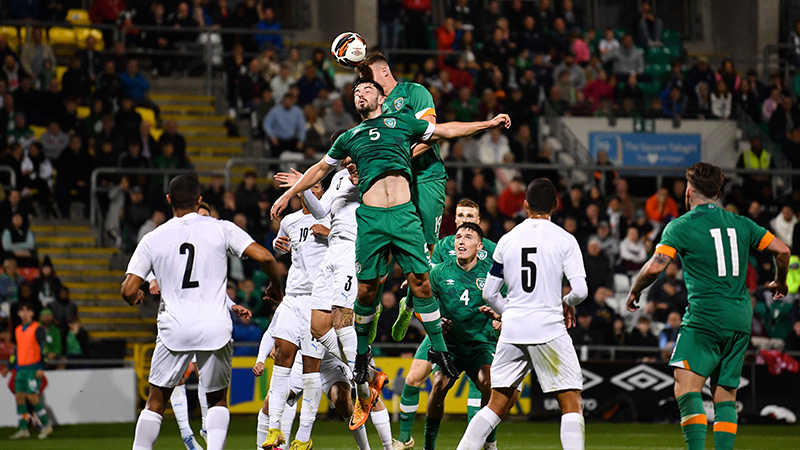 The Republic of Ireland were held to a frustrating, niggly & frenzied 1-1 draw, at Tallaght in the first leg of their Euro 2023 play-off against Israel.

Jim Crawford’s squad entered this play off tie seeking to make history by becoming the first U21's team to qualify for a major tournament.

If there was internal pressure, it didn’t immediately surface. Senior man, Aaron Connolly, had two decent chances early on.

First, Israel goalkeeper, Daniel Peretz diverted his shot onto the post before the former Seagulls striker fizzed a shot just past the post.

Mohammed Kanann called Brian Maher into action just before half time but the Derry shotstopper will not want to watch back the last play of the half.

Osher Davida swung a corner, Maher came out, found himself stranded & Idan Gorno had a gloriously free header, which he gleefully headed home.

That cheap concession was a sucker-punch for Ireland, yet they roused themselves. Tyreik Wright, particularly, kept his tempo high & from his own wicked delivery, Ireland equalised.

Wright swung in a wonderful corner kick & Evan Ferguson, only 17 years old, bulldozed Eiran Cashin, his own teammate, aside to thump an unstoppable header into the net.

The momentum had swung Ireland’s way & Israel were reduced to ten men with ten minutes to play. Defender Stav Lemkin was controversially sent off for hacking down a roving Connolly, he’ll be suspended for Tuesday’s second leg as a result.

If anything, Lemkin’s dismissal blunted the hosts as Israel sat back, absorbed pressure & expertly rode out, what admittedly, wasn’t much of an Irish storm.

Festy Ebosele impressed in a cameo after replacing Wright but Connolly & co didn’t exactly pepper Peretz in the closing stages.

So, mixed feelings for the boys in green. They came from behind to salvage something but with the manner of Maher’s error, they should have been the ones leading the match.

The second leg is on Tuesday night, in Tel Aviv. Join us on FinalWhistle that night as we report on what will either be historic happiness or heartbreak, tinged with rueful regret, from this first leg.