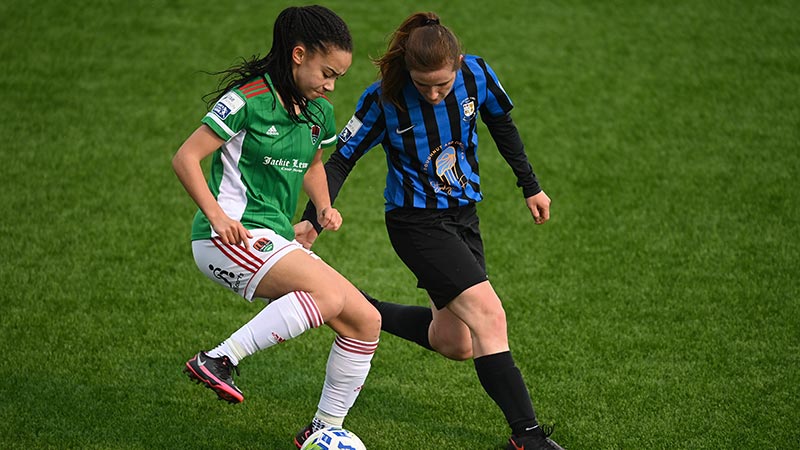 It finished 2-all in an exciting encounter, which really doesn't benefit either side as they remain close to the bottom of the table.

Cork City got the dream start – when Becky Cassin hit the net with a header from a corner in the second minute. This heralded a frantic opening period, with both clubs making some unforced errors. However, the match settled after the tenth minute and both sides enjoyed some good periods of passing play.

The hosts had two good chances in the 32nd and 33rd minutes, when Kelly Brennan hit a good strike which went just to the side, and substitute Katelyn Keogh put a chance over the crossbar.

Eventually the Midlanders got their breakthrough when Kelly Brennan put some good pressure on after Abby McCarthy left her goal line. A City player was deemed to have backed into Emily Corbett and the resulting penalty was put away by Emma Donohue. 1-1 at half time.

The first quarter of the second half saw no gilt-edged chances for either team, but Christina Dring had the Leesiders back in front in the 61st minute with a great strike.

Cork looked comfortable and you would be forgiven for believing they would see the game out at this stage.

However, Emma Donohue popped a free kick in well to the box in the 81st minute which was met by three Athlone Town players and was seen to the back of the visitor's net. Nobody was quite sure who had the final touch, but Melissa O'Kane was in the hunt, as was an onrushing Emma Donohue.

The hosts tried to get the winner in the final 10 minutes or so, and Katelyn Keogh did have a shot on goal but it just went wide.

Overall the 2-all draw was the fairest result on the night – both teams enjoyed periods of dominance and either could have taken all three points with chances at various stages and the shared spoils reflect that.