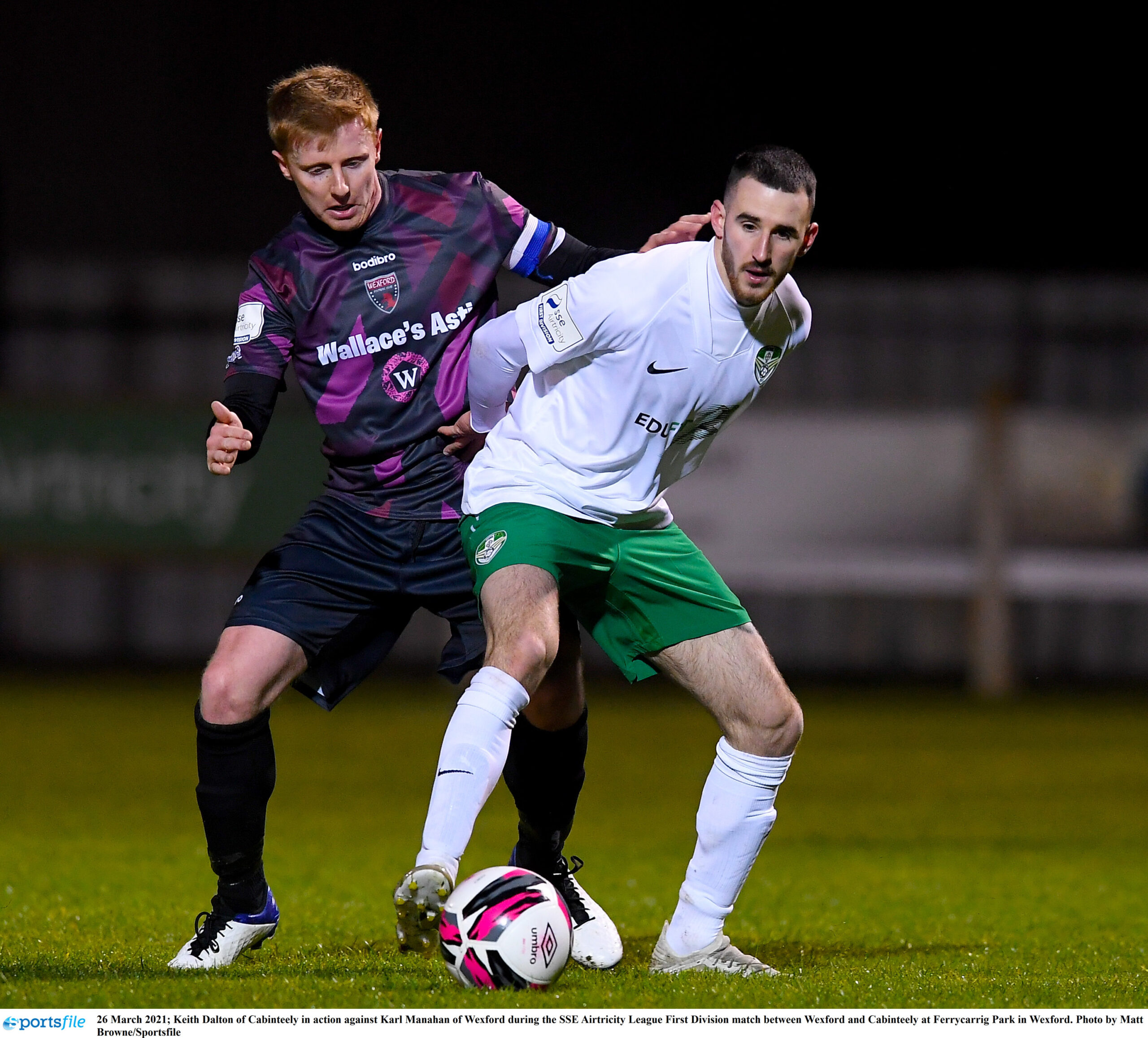 Despite being the very first game of the 2021 SSE Airtricity League First Division season this encounter was played at a frenitic pace with constant back-to-back efforts, balls hitting the woodwork, and some close calls especially from dead balls.

The opening period revealed defensive concerns and weighing up of the opponent's tactics from both teams, with a slight superiority for the Wexford side. The early season rustiness was fairly evident as you would expect on the opening night of the year.

The bitterly cold night at the Ferrycarrig Park got a little bit warmer for the visitors after nine minutes off as Kevin Knight’s head met a corner-kick leaving the Wexford goalkeeper Tom Murphy stranded to the spot. Wexford’s three at the back system had been breached for the first time of what would become a long evening for their defenders.

The hosts' first sign of life came with penalty appeals after a sequence of shots deflected by Cabinteely. Cabo were well organized and came close to doubling their advantage with the game's second goal as Keith Salton’s shot was bounced onto the post by Tom Murphy keeping Wexford in the game.

Pat Devlin’s troops kept on going with Kevin Knight threatening Wexford’s with a header from a corner-kick, a very nice chance as the game started to slow down after electrifying the first 30 minutes.

Wexford’s frustration with their own performance become more noticeable, resorting to long range efforts, none of which landed on target and players beginning to contesting several referee’s decisions as they found themselves one goal behind at the interval.

The second half brought a very similar first 10 minutes with Cabinteely again trying to implement attacking ideas. Andy O’Brien came very closem hitting the post and the bar in just ten seconds, a warning for what would be coming next.

A wonderful free-kick by Dean Casey eventually changed the scoreboard, 2-0 to Cabinteely with a powerful effort giving Tom Murphy no chances of stopping it.

Wexford replied after only three minute as Luke Turner scored on his debut for Wexford with a second goal in the game resulting from a corner-kick. This changed the momentum of the game as Wexford came forward looking for the equalizer just over the hour mark, Alex Aspil picked up a booking after a rough challenge as a result of the pressure Cabinteely were facing.

In the dying embers of the game, Wexford launched a final attack trying to snatch a final draw, with Brian O’Sullivan sending in Jordan Payne, Mitchell Bryne and Niall Barnes to shake things up, but Cabinteely held on well without coughing up any opportunities for the home side.

The last noteworthy play of the game was a cross from Success Edogun who came on replacing Robinson Kyle, ended up in Cabinteely Adam Hayden’s hands.

Wexford took too long to came back into the game and just could not find the second goal as Cabinteely returned to the capital with the victory and the all important three league points.