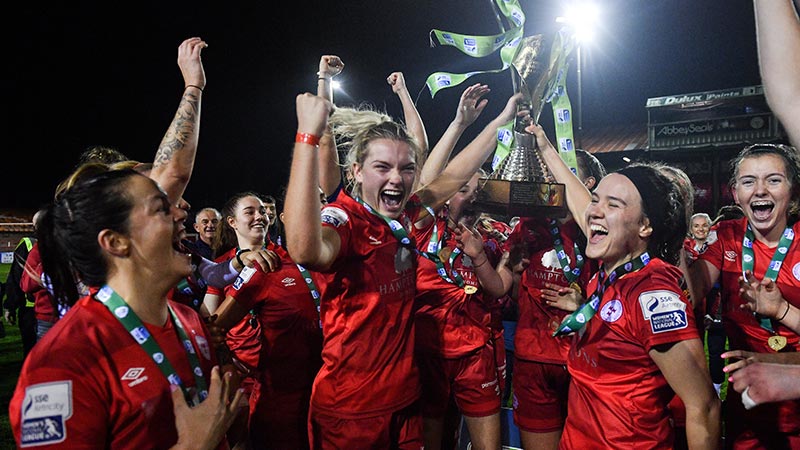 On a simply incredible night of drama in the Women’s National League Shelbourne have been crowned league champions following an impressive 3-2 win over close rivals Wexford Youths in Tolka Park.

While they set out their task on the night with professionalism with Jessica Stapleton influential throughout it was the high drama in PRL Park where Galway defeated Peamount to ensure the title will rest in Tolka Park this season.

As the news filtered through that Julie Ann Russell put the nail in the coffin against her former club the roar from Tolka Park could be heard around Drumcondra.

Both sides had chances early on with Ciara Rossiter and Saoirse Noonan having early sights on goal for their respective teams as both defences held firm. Noelle Murray almost made the breakthrough following a clever pass from Chloe Mustaki set Murray away with effort going over the bar at the near post.

Shels didn't have to wait longer to get the better of Wexford and their stand-in keeper, Edel Kennedy, as from a corner, the ball came to Jessica Stapleton at the back post with the 16-year-old nodding home from close range. They would double their advantage just a moment later as the Reds was awarded a penalty with Murray making no mistake firing the ball home to the roof of the net.

Kylie Murphy, forever a threat for the away side; looked to have her say on the night as the ball came to the striker on the edge of the area and she hit a fantastic effort on the volley, with Budden forcing to pull off an excellent save.

After the break, Shelbourne put themselves in command of the tie and one hand firmly on the title with Jessica Stapleton getting her second on the night. From a free-kick that sent into the area, Stapleton flicked a deft header to score.

As the news from PLR Park began to filter through Kylie Murphy had other ideas and left her mark on the match with a brace of goals. The first was a fantastic strike as she slotted home past Budden with a low effort. She followed that up with a fantastic header with just minutes to go that added drama to the occasion.

In the end, as the final whistle blew, sheer disbelief turned into an outpouring of jubilation as the impossible became a reality for Noel King and his players.

An incredible night of drama that will go down in the annals of history.