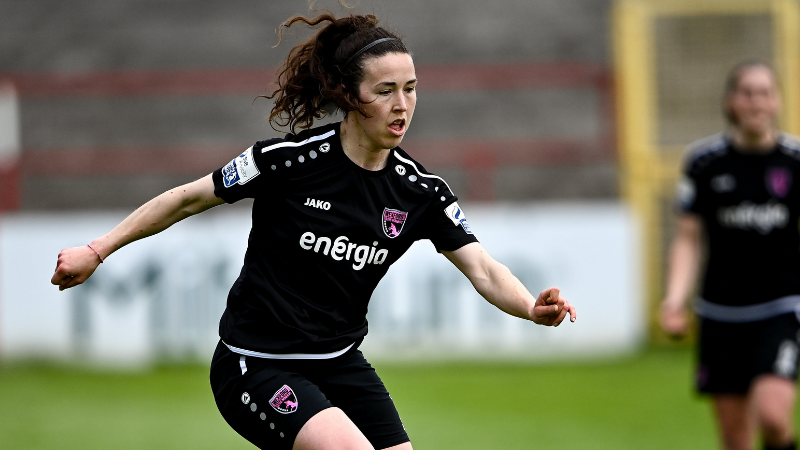 Lynn Marie Grant’s tremendous finish in the 89th minute crowned a Wexford Youths side, who finished with 10 players; with a 1-nil win in the clash at the top against Shelbourne at the Ferrycarrig Park.

Kylie Murphy was dismissed for the hosts, following a second yellow card in the 56th minute, and despite their numerical disadvantage they battled hard, but succumbed the pressure late on.

The late drama confirmed the heart-breaking outcome for the visitors and the end of their seven-game winning streak and a step down on the title-race.

The historical rivalry between the sides became clear since the first exchanges, with a dozen temper moments mixed up with goal opportunities on both penalty areas; a brilliant WNL visit card expelling the high-stake show between two runners up.

Shelbourne brought serious pressure on for the first exchanges trying to pin back the hosts, who were first coming close to the goal. A tremendous pass by Kylie Murphy left Aisling Frawley face-to-face with the Shelbourne’s keeper, as she sent it slightly off the post.

On the other side, Jessica Ziu got denied the goal of the afternoon by Dells Doherty super-tackle.

The back-to-back show continued with Edel Kennedy sending a serious header over the bar. Emily Whelan brought an immediate counter with a powerful shot from the edge of the box, but with the same outcome.

Ciamh Gray got her name noticed in just three minutes by denying both Whelan shot and Ciara Grant’s curveball with two unbelievable saves shortly before the break.

The effervescent vibe returned with the teams from the break, with Aoibheann Clancy seeing her freekick coming off the crossbar, with Amanda Budden saving brilliantly a second effort.

The scenario became darker for the Youths in the 56th minute, when Kylie Murphy left her side down to ten players.

Gray was called to action several times as she brilliantly kept her sheet clean, and when seemed to point out to a scoreless, a fast-paced counterattack got brilliantly finished by the super sub Grant, offering Wexford a late win