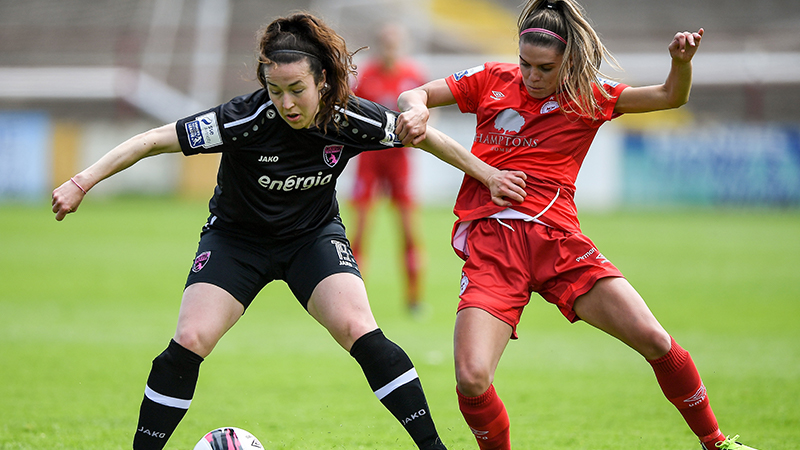 Shelbourne and Wexford Youths fought out a 0-0 draw in a tense affair at Tolka Park in the Women’s National League this afternoon.

Keeper Caoimh Gray kept her side in the game with two excellent saves from Shels Saoirse Noonan and Emily Whelan in the first half. The home side were also denied by the cross bar in the second half, Pearl Slattery’s header hitting the woodwork before her rebound went wide.

Wexford also had good spells, relying on the counter attack to beat Shels, but failed to create any clear chances for most of the game.

Shelbourne pressed high and saw most of the ball in the first half.  Wexford grew into it around the 20-minute mark as forwards Kylie Murphy and Ciara Rossiter saw more space but failed to create clear goalscoring opportunities.

The hosts were soon back in it and created their two best scoring chances in quick succession. Ciara Grant’s forward ball opened the Wexford defence and Saoirse Noonan looked to be in on goal only for goalkeeper Caoimh Gray to put her body on the line to get in the way. Gray made a second save soon after when Emily Whelan found herself one on one but failed to bypass the keeper.

Shelbourne had a scare before half time, when keeper Amanda Budden dropped the ball in the box from a Wexford corner but quickly regathered. Ciara Rossiter took a favourably positioned Wexford set-piece just before the break but hit it straight at Budden, who gathered easily.

Shels dominated again in the second half. Jessica Ziu created an early chance for Emily Whelan, whose effort dipped onto the Slaneysiders crossbar. Pearl Slattery got on the end of a cross in the 73rd minute, heading the ball only for it to hit the crossbar again while her rebound header went left and wide.

Wexford again relied on the break to sneak a goal. Sinead Taylor had a good chance from close range in the 83rd, which Budden just pushed away, while Taylor poked another wide with three minutes remaining.

The visitors, however, will almost certainly be the happier of the two sides as Shelbourne’s dominance for most of the game failed to show in the final score.