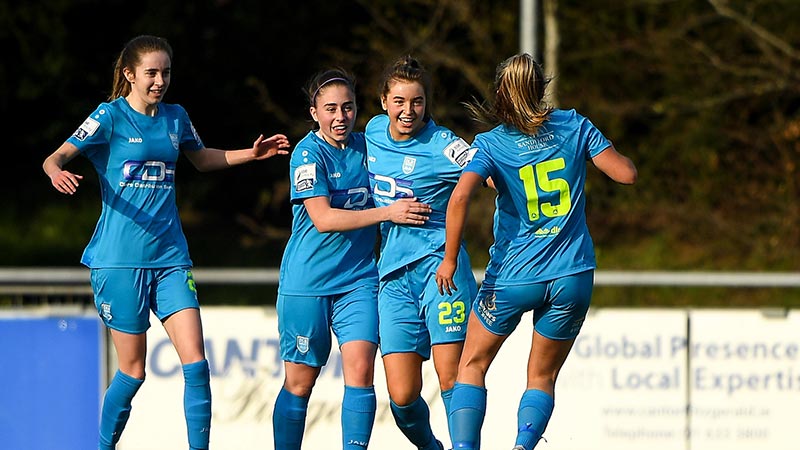 Shauna Fox’s own-goal and Katie Malone header guaranteed DLR Waves a 2-nil win visiting Galway in the 12th round of fixtures in the Women’s National League, keeping them at the door of the podium waiting for a slip at the top.

The Waves make their return journey with all three points after a very organised and lacy performance, simplifying what was expected to be a tough task.

Both teams started matters aware of how important would be a victory in this game, and eager to set a fast-paced football.

Carla McManus brought the first attempt of the game from the 25 yards, however not enough to bother the goalkeeper Leach Coen Hayes.

Lynsey McKey replied short after with a powerful left-foot shot as Eve Badana went down to deny her the first change in the score.

The Dubliners ultimately hit the front through an own-goal in the 11th minute; Rachel Doyle sent in a very nice cross, as Carla McManus first touch got deflected into the goal by Shauna Fox, leaving no chances for the keeper to stop it.

The early goal set the pace for the entire first half, bringing the marron outfit up in the field, with the capital side engaged in solid and organized defensive work.

Anna Fahey got on her head the best chance to put Galway back on levels terms, as she took some skin out of the right post heading Lynsey McKey’s cross.

Right before the break, Oleta Griffin played the hero role booting away a dangerous ball looking for Sined Donovan inside of the box.

The visitors returned from the dressing room intending to increase their advantage in the score, and trying to grab the three points with two hands.

The Galway crest got stuck in the opponent’s web, and just for once was capable of threatening Badana’s goal, in a sequence of a freekick; the keeper stopped easily McKey’s intentions.

Katie Malone confirmed Waves’ win in the 76th minute by heading home the second goal of the afternoon; a deficient approach by Leah Hayes Cohen to a ball sent in from a corner ended up with Malone sending the ball into the back of the net.