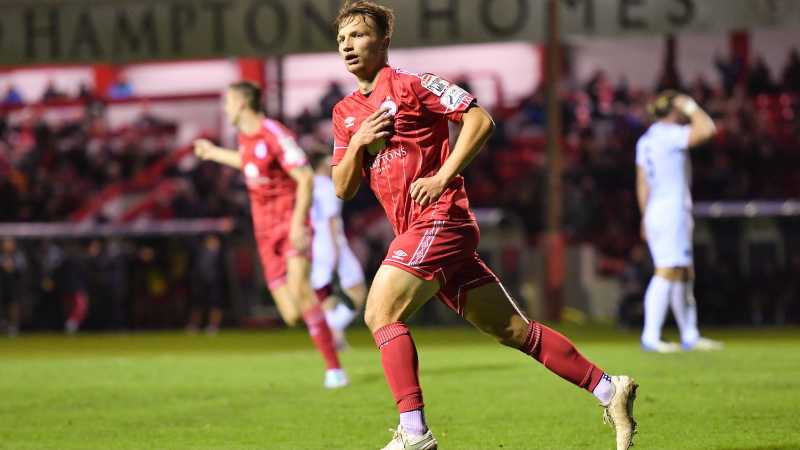 It was all too easy for Shelbourne as they put six past a poor Drogheda Utd side at Tolka Park. Sean Boyd scored a brace from the penalty spot while Jack Moylan and JR Wilson were also on target as Shels went in at the break 4-0 in front.

Matty Smith scored their fifth in the 64th minute and substitute Aodh Dervin got the sixth two minutes from normal time. Drogheda just couldn’t contain Shels. They allowed the Dublin side to play all the football. Brendan Clarke had a quiet game in the Shels goal and was rarely called on.

Shels took the game to Drogheda right from the start. Colin McCabe put Smith’s effort out for a corner in the seventh minute. Shane Farrell took the corner, it was flicked on by Stephan Negru to Moylan who headed home at the back post.

Shels doubled their advantage in the 15th minute; Moylan did well to find the space to play the ball into Wilson and he fired to the net from a tight angle. That was his first goal of the season.

Drogs offered very little and things got worse for them in the 21st minute when Shels got a third goal through Boyd. Keith Cowan hauled Luke Byrne down in the box and Boyd made no mistake with his spot-kick.

Cowan had a chance for his side but he headed over in the 24th minute. The game was over as a contest in the 31st minute when Shels got a fourth goal; Boyd again from the spot after Dylan Grimes pushed Smith over in the box. It was Boyd’s 15th goal of the season. Two minutes later Farrell brought a fine save out of McCabe as Shels were relentless.

Farrell had a chance to get a fifth for Damien Duff’s side after the break but his effort was poor as he tried to pick a spot. Shels did get a fifth goal in the 64th minute; Cowan cleared a ball but it fell at Smith’s feet and he made no mistake.

Sub Dervin sealed a fine win for Shels with his first goal of the season in the 88th minute.