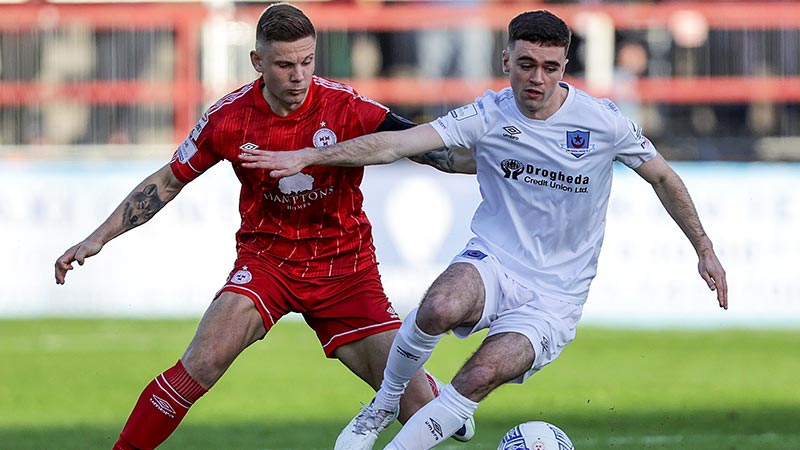 After a first half of almost no clear-cut chances, Boyd met an excellent Shane Farrell cross after 50 minutes to break the deadlock.

Despite plenty of attacking substitutions and threatening play from Drogheda in the second period, they never found a way back into it and Duff’s men held on for a big three points.

It was a dull game strictly in terms of chances but there was plenty to enjoy in terms of the competitive nature of the game and the importance of it was not lost on the players. The first half saw Kevin Doherty’s Drogs sit deep and give the Reds the freedom of possession.

This worked effectively and despite high spells of possession Shelbourne created nothing. They looked most dangerous from a selection of clipped balls down the channel by Shane Farrell that Sean Boyd tried to meet but the away side dealt with it adequately.

Drogheda themselves offered nothing in the first period and as a result it was a scrappy 45 minutes where defences ruled supreme.

It didn’t take long though for this to change when after 50 minutes, the Farrell and Boyd connection came to fruition. Farrell’s cross from the right found Boyd in acres at the back stick and he headed it into the far corner past Sam Long.

The home side came alive following this and threatened for the next 10 minutes. Skipper Luke Byrne nearly doubled the advantage when his header from a corner-kick went just over the bar.

Doherty made some necessary attacking changes around the hour mark which saw the introduction of Chris Lyons and Ryan Brennan. This gave the Louth side a renewed threat for the remainder but Shels, much like in the reverse fixture, managed the game brilliantly.

They broke up the play consistently without getting bookings and restricted Doherty’s men to route one balls. Drogheda had one huge chance to snatch a draw when Lyons’ deflected shot found Brennan at the goalmouth on 70 minutes but he blazed over against his former side.

The Dubliners held on to earn a priceless three points that now sees them go five points ahead of tonight’s opponents. The Drogs are once again blessed by other results as UCD defeated Finn Harps, but regardless their form continues in the wrong direction this evening.