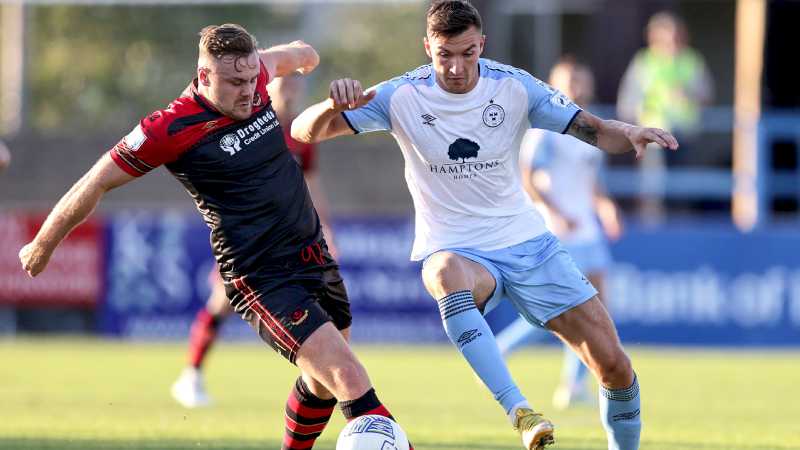 Drogheda came from behind to grab a huge 3-1 victory over Shelbourne tonight at Head in the Game Park, as Dayle Rooney and Ryan Brennan haunted their former team.

Shels started brightest as Jack Moylan dispossessed George Poynton with seven minutes gone and broke through to slot the ball home. However, Drogheda quickly found their rhythm and Brennan’s excellent finish in the box on 30 minutes had the game level at the break.

An exciting second-half would see the Drogs go ahead through a goal of the season contender from man of the match Dayle Rooney, who rifled a volley into the top corner approaching the hour mark. Brennan then added a third with a volley of his own after a brilliant diagonal switch from Andy Quinn with just over 10 left.

A statement victory for Kevin Doherty’s Drogs where the initiative of Rooney and Brennan rubbed off on the whole squad as they fearlessly brushed aside their M1 rivals. Conceding an early goal has often been Drogheda’s kryptonite, but their comeback this evening said otherwise and prevented three consecutive wins for Damien Duff’s men.

It was the Reds who started brightest though when sloppy play from Poynton put Moylan in on goal early on, and Moylan made no mistake when one-on-one with Colin McCabe. Shels looked more hungry as they pressed high, and it felt like it was going to be a dull night for the hosts.

However the first half refused to ebb and flow as numerous players went down with injuries in the next 15 minutes or so, halting the Dubliners’ momentum and causing starman Sean Boyd to leave the fray. Shels’ lack of depth meant they were forced to change shape, and as the game picked up pace again Drogheda became the aggressor.

Rooney was a menace on the left wing as Darragh Markey’s intelligence complimented the latter’s direct play. Rooney would find Brennan in the box on 30 minutes, as Brennan slotted home on the half-volley.

The second-half took a cagey approach early on, but Drogheda’s second goal couldn’t have ended this more emphatically. Rooney had an attempt blocked, but thundered the rebound into the top corner to put the hosts ahead.

From here, Drogheda’s intentions to rectify two previous losses to Shels this year were undeniable. On 77 minutes Brennan connected with a tremendous Quinn long ball and volleyed the ball into the ground and over Brendan Clarke before celebrating in front of Duff to know coincidence.

With the rivalry between the teams this was a massive result for Drogheda and showed them at their adventurous best. Shels showed quality in glimpses but lacked a leader when things didn’t go their way and ultimately their lack of depth didn’t come cheaply.