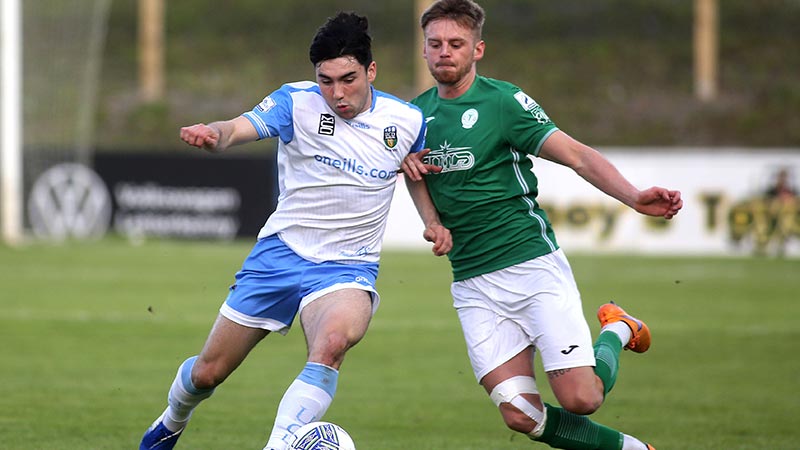 A late UCD goal courtesy of Liam Kerrigan gave them their first win of the season in a bottom of the table clash against Finn Harps at Finn Park this evening.

It took 83 minutes until the score-line was broken after a tidy finish from Kerrigan.

The first notable chance of the game fell to Dara Keane after 8 minutes when the midfielder got his head to a Mark Dignam corner but his effort ended up wide of the target. UCD tried to push high up the pitch, but this left space for Finn Harps to exploit.

After 15 minutes the Students had their first warning. Under intense pressure from Filip Mihaljevic, defender Eric Yoro left his header back goalward dangerously short. Kian Moore had to be very alert to clear his lines in the nick of time.

Colm Whelan, high on confidence after his double against Dundalk last week, began to impose himself on the proceedings. After 17 minutes, the striker left defender Ethan Boyle on his backside after a direct dribble goalward but his effort was blasted over.

The Students had the pick of the first-half chances. McGinley needed to be alive after 25 minutes after Jack Keaney split the defence and found Liam Kerrigan deep in the home side’s half.

Still, with plenty to do, Kerrigan controlled it beautifully and managed to get a strike on goal. McGinley made himself big and pushed the effort away from goal.

Again he was sharp after 38 minutes, Liam Kerrigan delivered a free-kick from the halfway line. The delivery was headed towards goal and found Dara Keane. An excellent sideways kick from the midfielder directed the ball goalwards but was held well by the Harps keeper.

The introduction of Bastion Hery at half-time and the injury of UCD danger man Colm Whelan swung the momentum toward the home side. 10 minutes into the second half, a clash of knees left the young striker in severe pain and despite his best efforts to return to the action, the Ireland under 21 international had to be replaced by Alex Nolan.

The Harps managed to control plenty of possession but they were unable to meaningfully test the goal of Kian Moore. An impressive defensive display from UCD, particularly centre-backs Sam Todd and Eric Yoro proved difficult to break down.

Just as Finn Harps pushed harder for an opener they were breached at the other end. In the 83rd minute, Jack Keaney won the ball deep in the Finn Harps' half with some brave pressing of the ball. He fed Caffrey who crossed in towards Kerrigan first time.

The winger who had moved into a central position following the injury to Colm Whelan managed to produce a lovely finish into the far corner much to the shock of the home fans. A massive goal and result which has shaken up the relegation fight this season.

The win puts UCD just two points behind Finn Harps as we approach the midway point of the season. Following Shelbourne’s victory over Drogheda United, a win today would have put the Harps level with the Louth outfit in 8th place but instead, they find themselves just two points ahead of UCD who remain in 10th. For Finn Harps, they travel to Drogheda next Friday night in another massive game while UCD host leaders Shamrock Rovers on Thursday at the UCD Bowl.