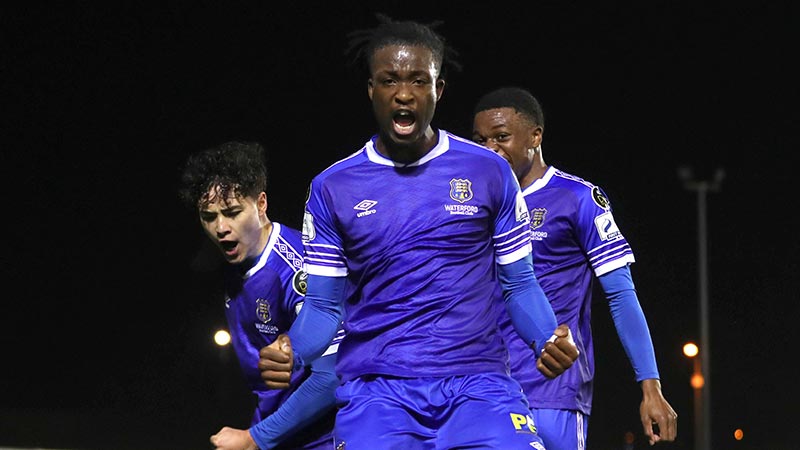 Waterford cruised to their eighth win on the bounce with another 5-2 win over Athlone Town tonight.

Braces from Roland Idowu and Phoenix Patterson as well as one from Louis Britton handed Danny Searle his second win in as many games. Shane Barnes and Gary Armstrong scored for the hosts, but it made little difference.

This one got off to a quick start. Ten minutes in, former Athlone man Tunmise Sobowale muscled off a man on the right hand side and hit a low drilled cross. This was flicked in by Louis Britton to give the Blues the lead.

Three minutes later however Athlone had an equaliser. Cian Kelly sent in a cross and Thomas Oluwa met it. Brian Murphy also came for it but mistimed his punch away, clocking Oluwa and giving the ref no choice. Barnes stepped up and sent the keeper the wrong way to make it 1-1.

Waterford heads did not bow and they had a penalty shout and a number of chances before regaining the lead. Van Geeren may have handballed from a Britton header and Britton himself came close after some nice link up play between Sobowale and Yassir El Naweh.

El Naweh himself nearly had a contender for goal of the season when he smacked the bar on the half hour mark. Waterford did not give up however.

In the 39th minute, a counter attack from an Athlone corner resulted in Patterson playing through Idowu, who slotted away. On the brink of half time, it was sealed.

Idowu and Patterson reversed roles and the Scot slammed it in off the bar. The replay shows that the ball didn’t cross the line, but it likely wouldn’t have changed the outcome. Waterford went into the break 3-1 up.

The gap widened three minutes after half time. Shane Griffin tried his luck from range and Andrew Skerritt spilled, which allowed Patterson to pounce on the rebound for a fourth.

Six minutes later however Athlone had one back from nowhere. Murphy scuffed a clearance and Gary Armstrong was alert, slotting it in low.

Just after the hour mark however Waterford reinstated the three goal lead. A cross from the right was flapped at by Skerritt, which fell to Richard Taylor. He drilled a cross to Idowu for the tap in, the game’s final goal.

Waterford gain ground on Galway who lost across the Midlands to Longford tonight. Two games, two wins for Searle in charge.