Draw for Dundalk in Europe 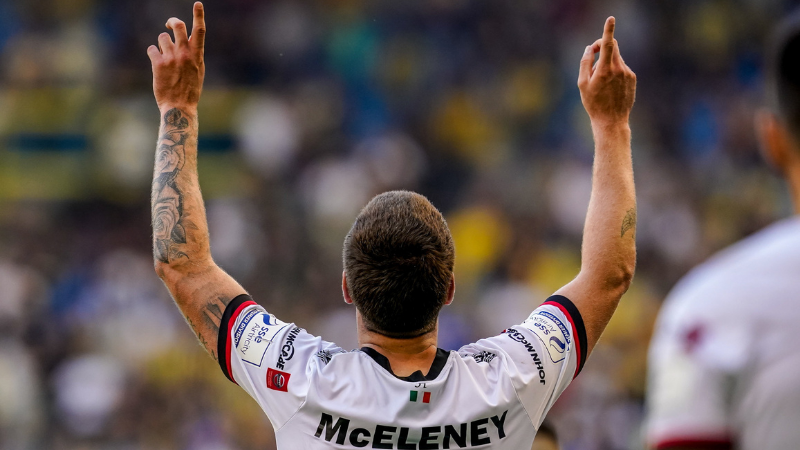 A last-minute Lois Openda goal for Vitesse Arnhem cancelled out a brilliant second half brace by Dundalk Patrick McEleney in the Netherlands tonight in the Europa League first leg.

Mary’s Boer opened the scoring in the first 20 minutes for the Dutch side. Openeda was then given his marching orders as he saw red in stoppage time.

Vitesse had the lion share of possession in the first half providing a high tempo display of attacking, at times pinning all ten Dundalk outfielders in their own box.

The break through however came before the 20-minute mark as The Airbourne lived up that name as they counter attacked with great pace with Slovak Matus Bero the driving force making it one nil to the Dutch side.

It was all Vitesse as they continued to hem Dundalk in for the majority of the half, with the lilywhites venturing forward on the very rare occasion. Alessio Abibi being called to action on multiple occasions in the Dundalk goal.

The second half was much more dramatic, the introduction of Patrick Hoban on the hour mark gave the lilywhites extra impetus and his quality was show almost instantaneously as he put himself about winning free kicks and getting his team high up the field. Hoban won the ball which created the chance for McEleney to equalise with a fine header on 65 minutes.

The goal seemed to change the balance of play; Dundalk grew in confidence while Vitesse seemed to be in a state of shock.

Just as it seemed The Hollywood men were likely to pin the Oriel side back, McEleney struck again. A through ball on the break, the Derry city bound player had still to beat to defenders and the keeper in the Vitesse goal. A neat pull back and a moment of brilliance, a wee flick, gave the away side the lead with just under 15 minutes of normal time to play.

Vitesse seemed to tire and barely threatened for the rest of the game until a momentary lapse from Sonni Nattestad awarded Lois Openda the opportunity to acrobatically equalise for the home side.

Moments later Openda was given his marching orders by Greek referee Anastasios Papapetrou, seemingly for something he said.

Dundalk almost grabbed a winner through Michael Duffy at the death but the Dutch side held on to the draw.

The side meet again on Thursday at Tallaght stadium, but at first Vinnie Perth and his team have to focus on St Pats in the league on Sunday.