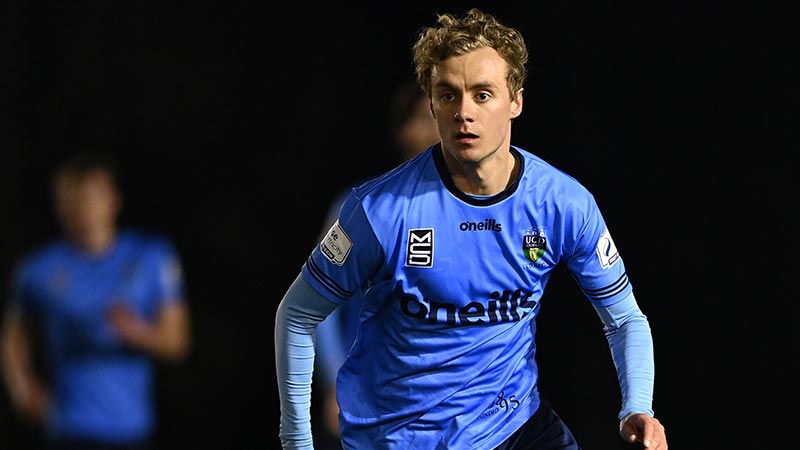 In an exciting open game of attacking football, UCD perhaps shaded it overall, as their substitutions added an energy to their play showing great resolve to come back from 2-0 down against an impressive Athlone team tonight.

Athlone had raced into a deserved 2-goal lead but UCD clawed their way back into the game, scoring a winner in the final minute.

In a very exciting game of attacking football, both sides had a man sent off as they contested every ball in this match.

UCD perhaps shaded it overall, as their substitutions added an energy to their play, creating problems for Athlone. They displayed great resolve to come back from 2-0 down against an impressive home side. Athlone had raced into a deserved two-goal lead, but the visitors clawed their way back into contention, scoring a winner in the final minute.

Athlone attacked the game from the off and UCD suffered a slow start, as they often have this season.

The Midlanders broke the deadlock through Dan McKenna in the fifth minute, after Sam Todd failed to clear a cross. Athlone looked to control possession in midfield, and it wasn’t until almost the 20th minute when UCD looked threatening.

Dara Keane was taken down in the area, but the referee gave a corner kick. Liam Kerrigan and Colm Whelan had moments of individual brilliance to get good shots on target.

However, it was Athlone who grabbed the second goal of the game after good play from Wixted and Tlou on the right wing. Tlou crossed expertly into the area for Shane Barnes to head home from five yards out.

Within five minutes, UCD had replied to make a real contest of the game. Colm Whelan, with his back to goal, turned and ran at the Athlone defence, drawing in defenders before slipping in Kerrigan who finished to the back of the net. Doona and Hollywood continued to threaten UCD in wide areas and they both had good possession in the first half.

Within ten minutes of the re-start, UCD were level after Brennan turned his man in midfield, played to Kerrigan, who fired the ball across the area for Keane to score. UCD sent on subs and started to dominate possession in midfield.

Both sides had men sent off within four minutes of each other as Tumelo Tlou and Paul Doyle received their marching orders in the last quarter. The game ended with lots of end-to-end play as both sides showed ferocious intensity in their attacking play.

The UCD substitute beat his man on the right wing in the 92nd minute and after an initial great save from Schlingermann, Mark Dignam was there to fire home a winner as the students completed a remarkable comeback.