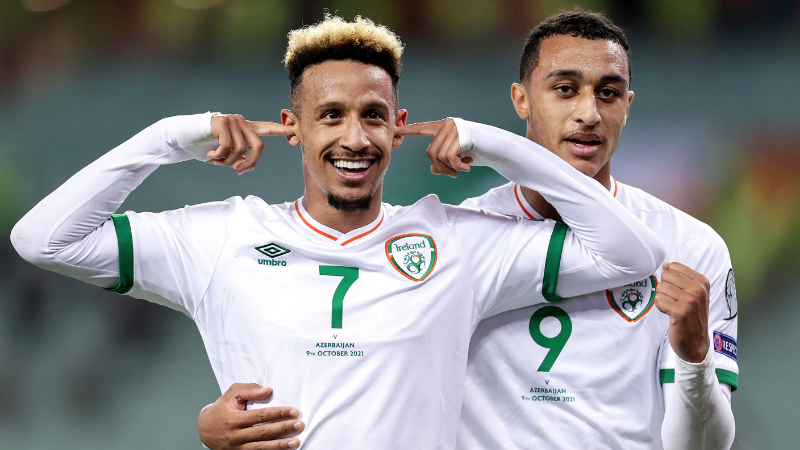 The Republic of Ireland gained their first three points of the qualifying campaign today after a win over Azerbaijan in Baku.

The visitors began on the front foot with their early pressure paying off after just seven minutes.

Robinson, who found himself in the headlines midweek, was fed the ball by James McClean and found the roof of the net with his left foot. It was a great start from the West Brom man and only began what would turn out to be a man of the match performance.

On the half hour mark Robinson nearly topped his first. The ball floated his way with his back to goal and he attempted a right footed acrobatic effort, which just sailed over.

He had his second in the 37th minute however. McClean again fed the ball to him and he came onto his right, before letting fly. His effort despite being tame, deflected and right at the keeper, found the net. Magomedaliyev in the hosts net should be disappointed he didn’t keep it out. Nonetheless, Robinson’s hard work had paid off and the boys in Green were in a comfortable position.

The second half came and Ireland should’ve made it three on numerous occasions before the hour mark. The link up play between Robinson and his teammates, including McClean and Idah, was particularly impressive. McClean nearly had one of his own after a long burst from inside his own half, but it was well blocked. Duffy also missed some good chances and he would’ve deserved a goal due to his excellent display at the back. Still, it never felt this would cost Ireland.

Azerbaijan tried Bazunu numerous times again, but he was always up to the task. He faced a lashed shot from 20 yards, ten minutes from time and pushed it onto the bar. It’s been said already but it can’t be said enough; Ireland may be sorted between the sticks for the foreseeable future.

The cake got its icing right before injury time when substitute Chiedozie Ogbene rose highest to meet a corner and his effort went over the line. There’s areas to work on, but it must be satisfying for all the hard work to finally manifest itself in a win for Kenny and his men.