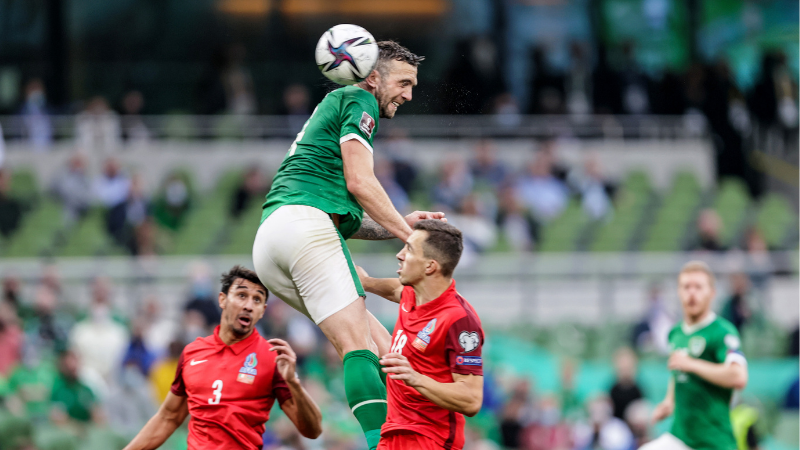 Shane Duffy’s late header earned the Republic of Ireland their first point of their World Cup Qualifying campaign after a 1-1 draw with Azerbaijan at the Aviva Stadium.

The hosts began the game brightly but allowed the visitors to come into the game as the half wore on and Emin Mahmudov’s injury time goal saw the home side go into the break a goal down.

Ireland were relentless in attack in the second and the pressure proved late on when Duffy’s header equalised for the Boys in Green.

Stephen Kenny's charges started well with runners attacking and opening up the Azerbaijan defence. It looked as if an early goal would surely come as Ireland came close to scoring on several occasions.

Matt Doherty headed wide from an excellently angled Josh Cullen ball, while strong running from Adam Idah posed a huge threat to the visitors. Idah muscled his way into the visitors box at one stage but his cross was defended and went out for a corner as the pressure built on Azerbaijan. Soon after the defence opened up for Seamus Coleman but his attempt to bend the ball into the Azeri net went wide.

Ireland faded gradually though and allowed the visitors into the game however. Azerbaijan fired a number of timid shots at Ireland keeper Gavin Bazunu as they gained confidence and enjoyed possession after the 20 minute mark while Ireland continued to try and get forward but could not break down an improving Azeri defence.

A minute was added on at the end of the half and as the Azeris roamed forward again Ireland appeared complacent. When Emin Mahmudov received the ball outside the Ireland box he found himself in plenty of space and fired a long range shot which beat Bazunu for the game's opener and Ireland went into the break a sickening goal down.

The Republic increased their intensity in the second 45 in search of an equaliser and barely allowed the Azeris into the game at all. Substitute Daryl Horgan was energetic from the off and Jayson Molumby's header from his cross went just wide. Troy Parrott also had a shot as Ireland continued to apply the pressure on the visitors but the Azerbaijan defence stood strong, helped in particular by some great goalkeeping by Sahruddin Mehemmedeliyev.

Ireland continued to attack but just couldn't find that cutting edge and looked as if they would fall to another defeat as the game entered its final stages.

Enter Shane Duffy. The Derry-man had hit a header over earlier in the half but up stepped the big center-back again in the 86th minute onto a great cross to hit a powerful headed ball past the Azeri keeper beaten at last.

Both sides had chances as the game opened up in the final minutes but neither could get a winner and the Republic of Ireland and Azerbaijan's first ever fixture ended in a 1-1 draw.

Along with the visitors, Ireland earned their first points of the World Cup Qualifying campaign, but the side are still without a competitive win under Stephen Kenny's management.