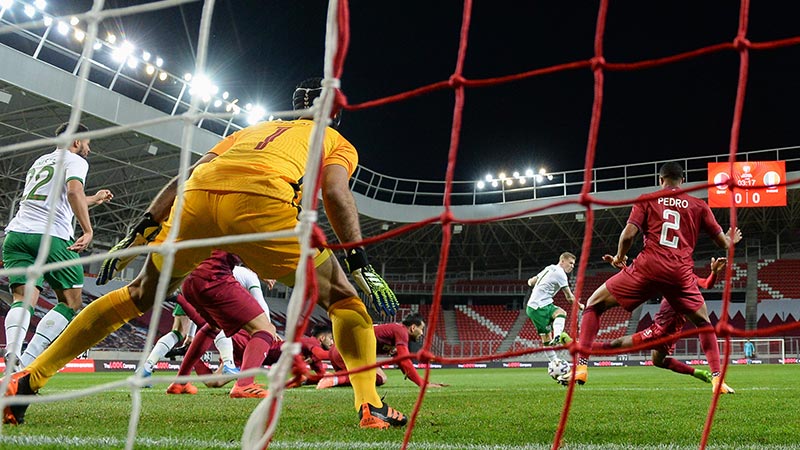 Ireland finished off this international series of matches with a draw that drew some comfort from the games that preceded it as Stephen Kenny got a response from his players following the disappointing defeat to Luxembourg last Saturday.

“It hasn't erased it as such, we need to change we knew that something needed to change” admitted Dara O’Shea

In a first half that showed promise, drive and very much something that Ireland would have been expecting from his players. It’s a positive outlay as to what exactly Stephen Kenny brings to the table. The second half in contrast was slow and static in periods but that is typical of a friendly. However, there are serious signs of promise and the early omission of Robbie Brady probably had a few pages of the playbook torn out immediately as a result.

“We've bring up one dimension nation for as far as for long as I remember” commented goalscorer James McClean.

“The managers got his own ideas and they look pretty and I am sure the manager will agree.  So far you know the results haven't been what we have been hoping for. Hopefully, you know after Luxembourg that's a turning point cause here you can show we're really, really trying.”

Ireland started very brightly as a fantastic pass from Hendrick to Shane Long who crossed it into the area with Hendrick striking it from the edge of the box but it was blocked down. Ireland continued to press with an excellent one-touch pass from Daryl Horgan saw Robbie Brady hit an excellent volley that was deflected for a corner. That corner led to the goal.

“That is something that we worked on yesterday. It shows that we can take things from the training. At the end of the day, we are all the players and that's our job we should be prepared” commented O’Shea on the goal

A very well-worked routine saw Daryl Horgan with a clever one-two with Robbie Brady and the Horgan with an excellently weighted pass to McClean who didn’t need a second invitation to smash the ball to put Ireland in front.

It looked as if Ireland rode their luck and then tried to create some of their own as an excellent forward pass was collected by Shane Long and his effort had to be deflected followed up by an immediate save by the goalkeeper to put it around the post for a corner.

Shane Duffy was called into action twice in quick succession as he cleared the ball and went back to give Bazunu a high five after the young keeper was alert to an attack that saw him clear the ball on the edge of the area. A short pass back from Daryl Horgan set Qatar away however Shane Duffy did excellently block away from the danger.

Qatar was level within eighty seconds of the restart as Muntari scored as the ball broke in the middle of the park and the striker switched onto his right foot and scored with a well-finished effort.

“So early on the second half it was tough for us and it's not OK we need to be resolute and especially at the start of the second half” comment O’Shea.

In contrast, the second half wasn’t as frantic and high paced as the first but Ireland with changes in tow began to look for that all allusive winner that Kenny has been craving. Hatim tried his luck from some way out but it went wide and Mohammad Muntari had another chance to win it but his effort went well over the bar. But it was Ireland in the dying embers of the game that nearly snatched the late win in Hungary.

Callum Robinson had a great chance as he collected the ball at the back post and if given a second more he would have snatched the winner, however, his effort under pressure went well wide. Josh Cullen looked odds on to become the hero as he headed a brilliant effort at the back post but it was saved excellently by Sheeb.

It was honours in what was a morale-boosting performance for Ireland. It was full of pace, direction and intent in the early stages of the contest. This you feel could be a turning point.

“I thought it was a decent game tonight Qatar played good football they were quick on the counterattack, we probably had again had much better chances.” Reflected Stephen Kenny.

“I think a lot of players that did really well and at the same time, I think seven players played there today that come right from the under 21 teams over the last couple of years. It gives us gives us strength and depth and it gives us players with potential who can improve squads. The experienced players add to the team and they did really brilliantly. That was a good display and we deserved to win.”

“I'm happy with the evolution of the squad and the way it's gone overall.” Stated Kenny in what began an impassioned speech in a bullish form that sent a signal out to those who have called for his time at the helm of Irish football to come to an abrupt end.

When he spoke about the disappointment of Luxembourg.
“There's nothing we can do about that now we can just look forward.” Stated Kenny

“I think you know I'm only here only six months before this match and you know tp implement a completely new style completely new. There is a brilliant culture in this team going forward. We just let ourselves down by not being winning we know that we're kicking ourselves. We had been very good against Serbia you know we probably deserved a point.”

“You know I won a league for four years and I am used to winning before this.”

“I was given the job because of my record. I'm happy with the way the players are progressing now at the moment and I have seen people have come out of the woodwork and want to kick us while we're down. That's part of it you have to accept it. I think we're going to formulate a very good squad for the next couple of years and I'm certainly going to be the manager for that I've got to make sure we're even better and that's the way I genuinely feel.”

Looks like Kenny has sent a clear message out to his detractors.