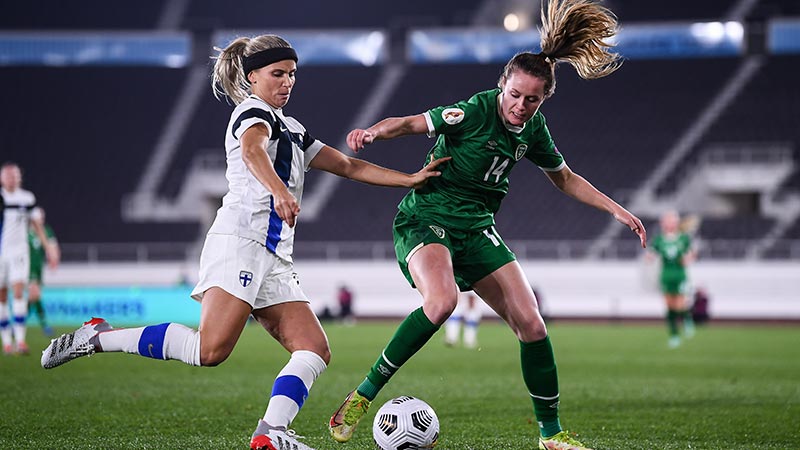 Ireland struck three points towards World Cup qualification this evening as they put a halt to Finland’s ten-game unbeaten run in Helsinki.

A Megan Connolly freekick was cancelled out by Adelina Engman early in the second half, but a poacher’s goal from Denise O’Sullivan ensured The Girls In Green came away from the match 2-1 victors.

In her last game as assistant coach, Eileen Gleeson got a send-off she won’t forget, as the triumph serves Ireland well in the opening exchanges in Group A with fixtures against Slovakia and Georgia still to come.

From the get go the visitors exerted every ounce of pressure possible, Jamie Finn and Katie McCabe, with O’Sullivan propelling forward in attack.

The first mark on the score-card came with just nine minutes surpassed, Connolly curling a ball into the top left corner of Finland’s net.

Aine O’Gorman put a stellar shift in at the back on her 100th appearance in the green shirt, as did Galway United’s Savannah McCarthy, Birmingham skipper Louise Quinn and Liverpool captain Niamh Fahey. The trio were major contenders throughout the nervy components of the game, they limited the Finns to only one concession.

That strike surfaced six minutes into the second half when Adelina Engman volleyed a cross delivered to her in Ireland’s box to beat Courtney Brosnan in net.

McCabe off the pitch receiving treatment when the incident occurred, the target marked Arsenal star was keen to impress when she returned.

Despite feeling like an eternity more, just minutes later Ireland equalised when O’Sullivan capitalised on a dropped ball by the home outfit’s keeper to head the ball into the back of the net from the far post.

An intensity ramp up followed as the hosts looked to regain a share of the spoils and Vera Pauw’s group attempted to retain their lead.

There were no signs of pulling back however, Rianna Jarret entering the fray for Lucy Quinn in the 74th minute.

Much like Ireland in the Sweden game, Finland gave their opposition everything they had in the closing quarter, but to Ireland’s delight it wasn’t enough to compromise the score-line.