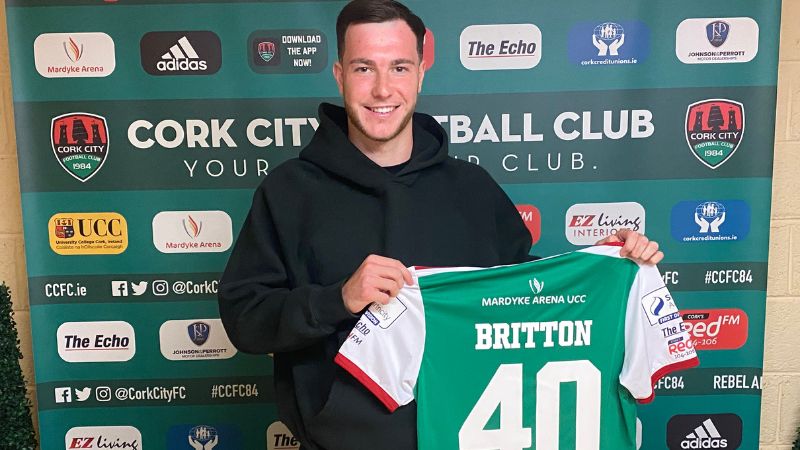 Cork City have managed to pull off the signing of Louis Britton, who has been in prolific form for rivals Waterford this season.

The 21-year-old had been on loan at The Blues from his ex-parent club Bristol City for the first half of the 2022 First Division season. However, following the end of his contract with the English side, Britton’s loan deal also ended.

This left Britton as a free agent. Waterford anticipated his departure and thanked him for his services via Twitter at 10am earlier today. The move to Leeside however, was anticipated by few.

Cork announced the signing of Britton at 3:30pm via Twitter, hours after Waterford waved goodbye publicly. In a statement released earlier, the league leaders said:

“Cork City FC are delighted to announce the signing of Louis Britton.

“The 21-year-old English striker joins having spent the first half of the season on loan at Waterford, where he has scored 10 league goals in 18 appearances.

“Speaking to CorkCityFC.ie, Britton said: “I am delighted to be joining Cork City. I’ve had a good chat with the manager and I was impressed by what he had to say. I’ve played against them twice this season and have been very impressed with the side. It’s been a good first half of the season, and we all know that we need to work hard to maintain that for the rest of the season. I am looking forward to getting into training and hopefully contributing to a successful season.”

“There was a really great atmosphere at Turner’s Cross when I played there early on in the season, so I am really looking forward to playing in front of the Cork City fans as a home player.”

“City boss Colin Healy welcomed the news, saying: “Louis is a very good player and has a real eye for goal. We were impressed with him when he played against us earlier in the season, so we are very pleased to have him on board for the rest of the season. He will add a real attacking threat to our side and I am confident he will make a positive contribution to the side.”

Britton has played for a litany of clubs across England’s lower divisions throughout his career, but this was his first season in Ireland. His 10 goals in 18 games for Waterford sees him joint second on the goalscoring table for this years First Division, joint with Galway’s Stephen Walsh and two behind ex teammate Phoenix Patterson.

The move may change the whole dynamic of the promotion race. Britton’s goals had been key to Waterford winning eight games on the bounce, which has left them four points behind Galway in second and eight behind Crok in first, with a game in hand on both.

Cork will be hoping the move will help them power ahead of the chasing pack, while Waterford will look to replace the goals and hope that their other attacking players step up as a result.

Britton may make his Cork debut in the Carlisle Grounds Friday night against Bray Wanderers. Waterford meanwhile play their first post-Britton game of 2022 away to promotion rivals Galway in what’s sure to be a tough game.

Waterford and Cork next face each other on the 9th of September at the RSC.