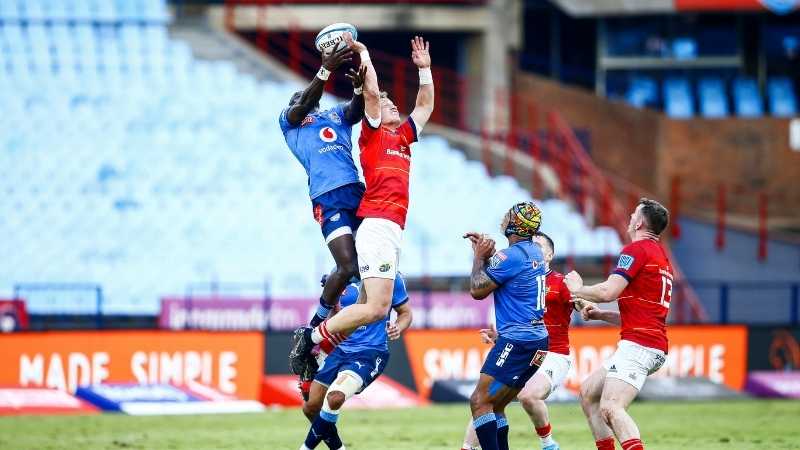 A strong opening half performance laid the foundations, as the Vodacom Bulls picked up a 29-24 win over Munster in the United Rugby Championship this afternoon.

Opening half tries by winger Madosh Tambwe and second row Walt Steenkamp, helped them build their lead but the boot of Chris Smith was their most dangerous weapon, kicking 19 of their 29 points.

Damian DeAllende came on for his first appearance since January, a welcome return for the Munster men with the South African touching down for a try in the second half.

Despite a spirited late comeback by Munster in the second period, it was a strong showing for the Bulls who played the final ten minutes with 14 men. Replacement hooker Bismarck du Plessis was sent off in the 69th minute for a dangerous tackle on Alex Kendellen.

Smith gave the hosts an early lead after three minutes from the tee, the fly-half landing a close-range penalty with Munster guilty of some ill-discipline at the breakdown.

Ben Healy replied just two minutes later to tie the contest, this time the Bulls were penalised and the kicker opted to kick at goal for the points, to steady them early on.

It was a contest of the fly half’s in the early exchanges, Smith kicking Bulls back into a three point lead as Chris Cloete was penalised for being offside, the hosts narrowly ahead 6-3 after nine minutes in Pretoria.

Captain Jack O’Donoghue looked to have crossed for the game's opening try in the 12th minute, a Munster line out leading to a driving maul with O’Donoghue crossing over, the TMO however reviewed it to be illegal obstruction by the Irish province with the try overruled.

Just four minutes after Munster's try attempt, the Bulls punished them and managed to cross their first try of the afternoon. Madosh Tambwe received an offload from a tackle, before using his pace to evade the challenges of the Munster defence to cross over, Smith's conversion making it 13-3 after 17 minutes.

Yet more ill discipline saw Munster go 13 points behind in the 22nd minute, another offside giving Smith an easy short range attempt at the posts, he made it 4/4 from the tee.

It was becoming a tough afternoon for Munster as they were again guilty of giving away penalties, the tenth penalty conceded saw Alex Kendellen sent to the sin bin after 29 minutes for a no arms tackle, Smith landing the resulting penalty for a 19-3 lead at the half hour mark.

The Bulls were in the driving seat and managed their second try after 33 minutes, with the powerful lock Walt Steenkamp driving over to score.

They broke clear again with the Munster line holding well but they could not handle the Number four driving in space, Smith gave them a 26-3 lead into the interval.

Seven minutes after the restart Smith kicked his fifth penalty of the afternoon, further extending their lead as Munster again were penalised at the breakdown.

Bulls Centre Harold Voster was lucky not to be shown the sin bin minutes later for a high tackle, making contact with the neck of a Kendellen in the collision.

Kendellen managed to cross for the visitors first try of the afternoon, he picked from the maul to cross over after 54 minutes, Healys conversion making it 29-10. Bulls looked to have replied straight away through Tambwe, but a knock on in the build up overruled the on field decision.

The Munster comeback continued as Damian DeAllende managed to touch down a loose kick in behind the try line, his first appearance in red since January marked with a try, a great Healy conversion saw them trail 29-17 after 66 minutes.

O’Donoghue got his try after 74 minutes, driving for the line but this time the build up was incident free and with Healy adding the extra two points, it was a nervy final five minutes in South Africa, Munster trailing 29-24.

The Irish province could not find the magic spark to overturn the late deficit, the Bulls holding firm with their 14 men, to take home a valuable four points.