Munster dig in to edge win over Ulster 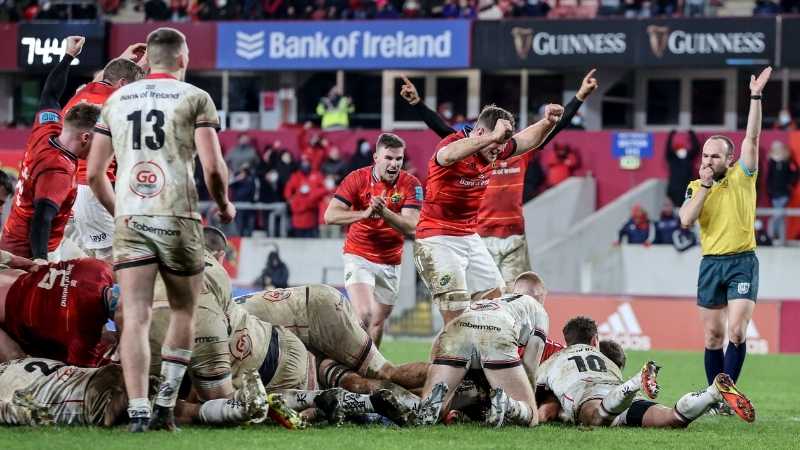 Academy graduate Alex Kendellen was the match winner on the night, his try in the 76th minute, followed by a Ben Healy conversion, to give the hosts all the points.

Munster played the majority of the game with just 14 players, as Simon Zebo was shown a straight red card for a dangerous tackle.

It looked to be another disappointing night and performance for Munster, they were aiming not to suffer back to back defeats to their inter provincial opponents, and a late drive for the line saw them home.

Ulster crossed early in the opening half to get their opening try of the evening, Rob Herring seeing his lineout turn into a driving maul toward the Munster line, the Hooker managing to cross from the back. John Cooney kicked the conversion to make it 7-0.

Munster were dealt a further blow in the 15th minute, winger Simon Zebo shown a straight red card for a shoulder challenge into the head of Ulster’s Michael Lowry.

A horrific opening quarter for the home side, as they trailed on the scoreboard and were down numbers on the field.

In tough weather conditions, Jack Crowley got the opening points for the Southern Province in the 32nd minute, landing a penalty in front of the posts from short range, narrowing the gap to 7-3.

Crowley added a further penalty to cut the gap down to the minimum in the 39th minute, but just before the halftime break Nathan Doak, a replacement for injured scrum half John Cooney, converted a penalty of his own making it Ulster 10-6 Munster at the interval.

It took until the 56th minute of the second half for the first score, Doak who has impressed all season, making no mistake again from the tee as he notched a further three points from distance.

Munster quickly made the equal man advantage count, a superb pass from Craig Casey as he fired the ball out to the far touch line, Mike Haley on hand to cross for the try, Crowley missed the conversion, leaving it 13-11.

The Shannonsiders had a more impressive performance in the second half, but did have plenty of errors in their game, Doak could have punished them in the 71st minute but his penalty fell short of the posts.

Losing Peter O’Mahony before the game and having Zebo sent off after 15 minutes, the luck did not seem to be in Munsters favour, but up stepped Kendellen not named in the original squad, as he responded quickly to score the decisive try.

A tough bruising battle in Thomond Park, the hosts playing 65 minutes with just 14 men on the field, helping them record a seventh win of the season.