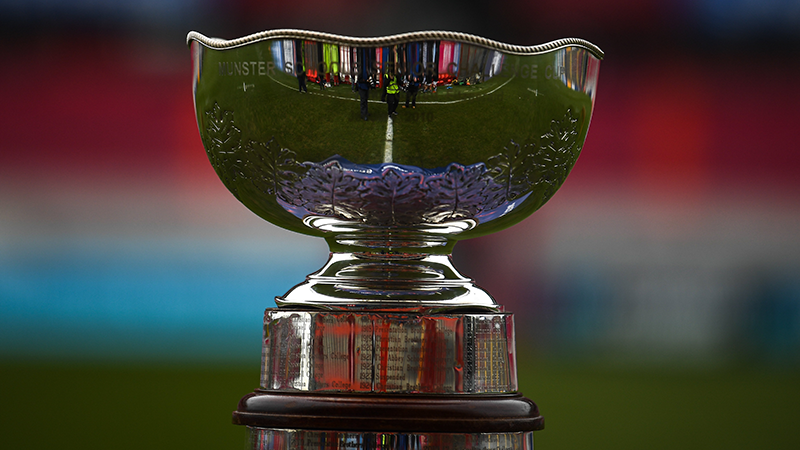 Crescent College advanced to the Quarter Finals of the Munster Schools Senior Cup, holding on late in a high scoring encounter with Bandon Grammar.

A damp squib of an opening half was brought into life with plenty of tries added in a second half spell, with a late burst of scores for Crescent enough to see them face Ardscoil Ris in a Limerick derby.

Despite the best efforts of winger Conor Ryan who bagged a hattrick of tries and the boot of Symington it was not to be their day in the end as they fell just short.

Bandon started brightly quickly attacking the Limerick side’s defence, they pressurised them and eventually after phases and phases and going wide, winger Conor Ryan went over in the corner for the try, fly-half Peter Symington had a difficult kick from the side-line and his effort dragged wide.

Last year’s winners behind early now looked to start a charge to come back into the game, they had possession and worked well to get up the other end, a strong maul got them shy and a drive by Fionn Casserly got them over the line, Eoin O’Callaghan stepped up to make the conversion but it narrowly went right and wide.

O’Callaghan would land a penalty in the dying embers of the opening half to put Crescent ahead, but deep in added time Symington stepped up to land a close range kick to level matters at the break.

Immediately after the restart the game sparked into life again, Cillian Kelly caught the restart and the big number 8 charged clear evading tackles and getting over for their second try, a beautiful conversion by O’Callaghan followed to restore their lead 15-8.

Bandon were far from out and minutes later drew level once more after a free flowing move they worked wide and Calem harte dotted over, Symington had a difficult kick to follow but he produced a beautiful strike to tie matters once more.

The Limerick side would however take a foothold in the game as we ticked into the midway point, Marcus Lyons and Andrew Ahearne both getting over with O’Callaghan converting both as they moved 29-15 ahead.

Drama throughout the game but Bandon started a comeback and Conor Ryan finished off a great move after the hour mark and Symington did his job to make it 29-22 off the tee. But just minutes later substitute Conor Ryan, the Limerick one, managed to get over for Crescent and O’Callaghan converted to make it a 36-22 lead.

But time was not up and Ryan completed his hattrick late on, Symington nailed the kick and after some afters they had a penalty on half way to go again at a late score, in the end a knock on saw the referee blow the whistle to end proceedings wit Crescent holding on.

Oisin Pepper crossed late on in the second half to ensure safe passage for St Munchins into the Semi Finals of the Munster Schools Senior Cup as they overcame Ardscoil Ris this afternoon.

Ardscoil must now endure a quarter final with either Bandon Grammar or Crescent College to continue their charge in the Cup, Munchins controlling a lot of the tie.

Muchins attacked from the off and put the Ardscoil defensive line under pressure and made them work hard to try keep them at bay, the pressure continued and resulted in Oisin Minogue getting over for an opening try in the sixth minute, fy-half Cillian O’Connor was composed to step up and add the extras off the tee.

Momentum stayed with Munchins as four minutes later they added a second try, another attacking move saw them shy of the line, Jake O’Riordan the scrum-half waited at the back of the maul but had the ball slapped away by Luke Murphy, the referee awarded a penalty and the Ardscoil Number 8 went to the bin, another big drive led to Danny Williamson crossing for the try, O’Connor again able to dissect the posts for two more.

We entered the feeling out process after the second half as both teams were looking to gain ground, Ardscoil needed to press on being down 14-0, they looked to have gotten a try in the midway mark of the opening half but the referee saw something he didn’t like and awarded Munchis a penalty.

Late in the half Ardscoil fond touch inside the Munchins 22, a strong lineout and maul put the within distance of the line, the forwards did the grunt work and Murphy banned earlier on the half was the man to get his side on the board with a try, Aaron Bryne’s added the extras to make it a seven point game.

Time was still there for another score, Munchins went back on the offensive and a penalty on the five metre line saw them kick for touch, the lineout was swatted back toward the Ardscoil line with a turnover the final act of an entertaining half, with Munchins leading 14-7 at the break.

Six minutes into the second half Ardscoil got on the board, they drove well and looked to get an early try as their friwards aided them creeping forward, however the referee called play back and awarded a penalty to Ardscoil which Bryne’s pointed to the posts, his strike was clean as he made it a four point game.

Action continued but either side was able to break the deadlock as we approached the hour mark, an intentional knock on saw Alan Fitzgerald heading to the bin as the winger for Munchins halted play, then would turnover possession seconds later and work it up the field to within inches of the line, a penalty was called again they went for touch shy of five metres the lineout won possession but the referee called a penalty for Ardscoil to clear.

They made ground between the 22 and 10 metre lines, pressured their aul worked well and Byrne’s cleared, Matt Te Pou gathered the clearance kick and his pass to Adam Cusack saw the winger race clear beyond halfway he offloaded to Oisin Pepper and the centre had pace to burn to cross in the corner, O’Connor missed the kick as their lead was 19-10 with time up. 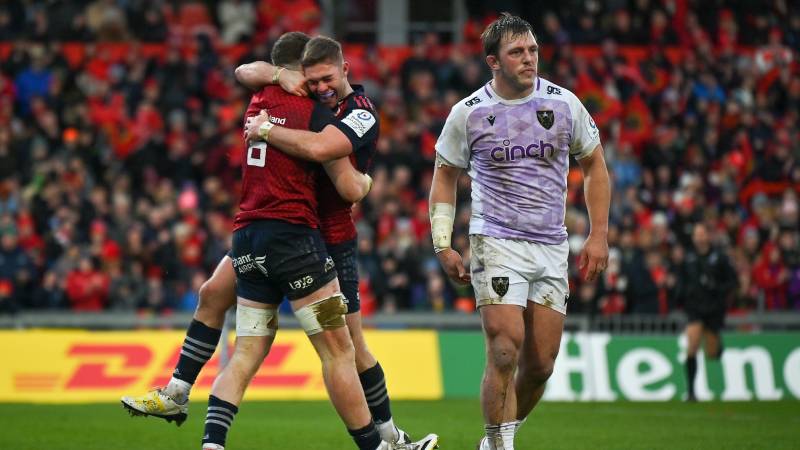 Munster have recorded anther success in the Heineken Champions Cup, despite playing the majority with 14 men and failing to register a second half score until the 75th minute.

Munster started better and after Mike Haley collected a highball and went on a mazy run before he was brought down by Northampton, they were penalised at the breakdown and Joey Carbery stepped up and landed the kick for a 3-0 lead after two minutes.

Things would get better for the hosts, another penalty saw Carbery to kick to the corner, they executed the lineout perfectly and forced another penalty that they took quickly with a little tap and go as Gavin Coombes charged over from close range with the conversion giving them a 10-0 lead after ten minutes. Northampton had a double blow as just after the try Mike Haywood was shown  a yellow card for a high tackle on Joey Carbery.

With the extra advantage Munster kept up the pressure, another trademark move saw them gain ground, a gap opened out wide with Coombes darting on the wing, he didn't have the gas to get over for a second try but offloaded to Jack O'Donoghue to work the score, Carbery on hand to make it a 17-0 game after 21 minutes..

While it was going all the way of Munster just seconds later Jack O'Donoghue was sent off after going too high going into contact and his shoulder made contact with David Ribbans' head, no choice that it was indeed a sending off.

The card did little to stop the Munster machine from following in a further score,  Coombes powering over from close range with the support of his teammates, Carbery making it 24-0 off the conversion.

The second half would start with Munster on the back foot, the visitors carried well through their forwards before going wide where they had an overload, as Tommy Freeman got over with Fin Smith converting to reduce the gap after six minutes past the restart.

Smith landed a penalty minutes later to again chip away at the Munster lead before they hit the jugular before the hour mark, after a kick and chase to the corner by the Saints Joey Carbery was back to gather the ball but support failed to come quick enough and the ball was turned over for James Ramm to score, Smith reducing the gap to 24-17.

Agan Munster found themselves penalised this time for not rolling away and Northampton fly-half Smith narrowed the gap to four points after 71 minutes, eventually after 75 minutes Munster got on the board in the second half as Jack Crowley stepped up to slot a penalty to push them ahead 27-20.

Shane Daly made a match winning try late on to stop the Saints having a chance at a late try to equalise, but they would get a penalty to leave it a four point margin at the end.