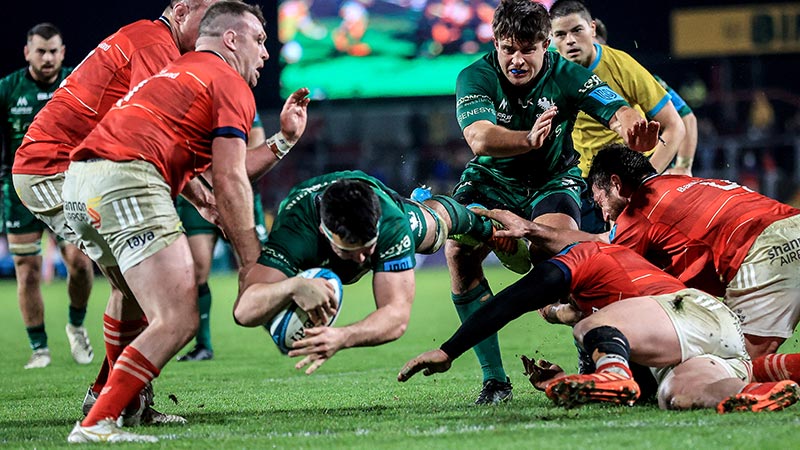 A late Diarmuid Barron try keeps Munster unbeaten this season, on the fifth anniversary of the passing of legendary Munster player and Coach Anthony Foley, as they were 20-18 winners over Connacht in tonight’s action, in the United Rugby Championship at Thomond Park.

Barron's try gave the southern province the win, the big man crossing from a maul on the 5m line. Chris Cloote had scored their other try, toward the end of the opening half with a fantastic effort.

For the day that was in it, the game was one Munster should not have lost, all the emotion in the build up around Axel's anniversary, the Thomond faithful expected the win.

They did not make it easy however, plenty of turnovers for the majority of the game, and poor discipline early saw them 6-0 down, by the 10th minute as Jack Carty added two penalties.

It could have gotten worse for the Munstermen, Connacht thought they had the opening try in the 24th minute. Mack Hansen got over in the corner, Tiernan O’Halloran with an amazing pass to find Hansen in space, but the ball was passed forward and ruled out by the TMO.

The main momentum shift came in the 33rd minute of the first half with Sam Arnold receiving a yellow card for a dangerous high tackle. Munster took advantage as Chris Cloote crossed before the break.

All credit going to Tadhg Beirne for their opening try, he managed to react to a crossfield kick by Rory Scannell. He kicked the ball forward and started to play soccer with it, running through to kick behind the line, for Cloote to pounce on the ball. Munster taking a 7-6 lead to the break.

Cloote looked to have gotten a second for the Shannonsiders minutes after the restart, he crossed over but the ball was held up, a massive let off for the western province.

The Red Army were putting the pressure on making use of the man advantage, as they were awarded a penalty in the 49th minute. Carbery put four between the teams, 10-6.

Just as it looked like the Thomond outfit were building a lead, Paul Boyle crossed over the line for the Galway side, he took a quick free and powered over the line, as Munster failed to react quick enough. Carty missed the conversion to leave it a one point game 11-10.

The boot of Carbery was an important asset for the team, he restored their lead, as he added another penalty.

Munster were guilty of coughing up possession all game, and Jack Carty punished them in the 69th minute, as he blocked down a Carbery clearance kick, to intercept the ball and managed to run through to score under the posts, the kicker on hand to convert his try, 18-13.

Despite only having a reduced capacity due to Covid regulations, the famous Munster roar and atmosphere was reverberating, around the famous stadium, the crowd fully behind their team.

They dug deep late on and right at the death, replacement hooker Diarmuid Barron crossed for their second try of the game, Carbery taking the pressure conversion and sending it over, to keep the province unbeaten status alive.