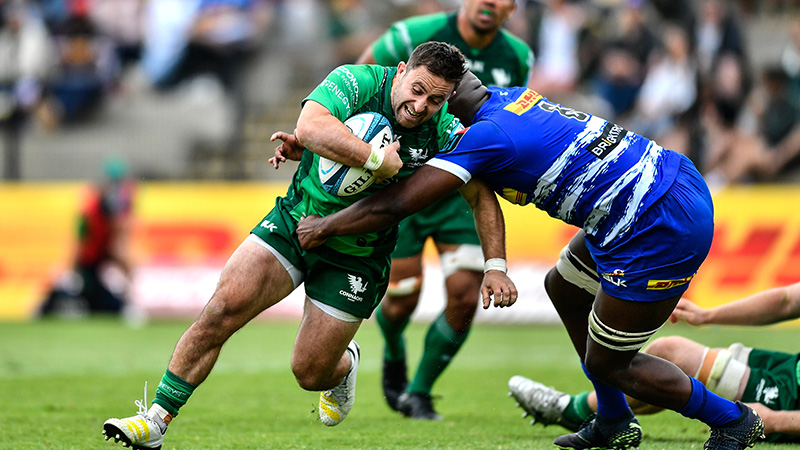 A moment of madness from replacement Bundee Aki saw this game settled for the Champions as Stormers ran to a comfortable bonus point victory in Stellenbosch this afternoon.

On the hour mark Connacht centre Tom Farrell crossed the whitewash to reduce the arrears to a single score, but the video referee pulled it back for a check which saw Aki dismissed for making contact with the head of an opponent in the tackle. A try for flanker Hacjivah Daymani minutes later effectively ended the contest.

The stormers started brightly with Evan Roos gaining possession and running clear toward the line brushing off an attempted tackle from Mack Hansen to touch down in the corner. Manie Libbock added the extra’s for a great start for the home side.

Conor Fitzgerald opened the visitor's account with a penalty to reduce the gap but then Libbock kicked one of his own to cancel it out.

Manie Libbock missed a routine penalty for the reigning Champions but recovered minutes later to convert another penalty to extend their lead to ten points.

Almost instantly Connacht winger John Porch found some space in the home defence to create an opportunity for the westerners but a high tackle ended his run. It did create a period of pressure from the Irish side but their efforts to get across the line saw Caolin Blade held up as he sniped from the base of the ruck.

Stormers struggled to clear their lines as Connacht grew into the game with the champions giving away a number of big penalties. A rush of blood to the head from Marvin Orie saw the second row come over the top of a ruck and receive a yellow card for his efforts.

Seeing their advantage Connacht passed up a number of opportunities to kick for the posts, going to the corner each time resulting in a textbook lineout and hooker Dylan Tierney Martin touching down for a score to close the gap to five at the break.

Fly half Libbock opened the second half for Stormers, scoring with a penalty after a sloppy error by the Irish side before Connacht lost Caolin Blade to an injury as Kieran Marmion entered the fray.

Connacht dominated the territory and possession but it was an error from Bundee Aki which gave Libbock his easiest kick of the afternoon to put eleven between the sides.

With twenty minutes left on the clock Marmion and Porch combined to break the line but hesitation from the scrum half saw the chance evaporate.

Tom Farrell did touch down after a fantastic move from the Irish side but it was overturned after a foul in the build up saw Bundee Aki dismissed for making contact with the head of Seabelo Senatla and the score disallowed.

Within two minutes the game was over as a contest. A beautifully worked try for the home side saw hooker Andre-Hugo Venter touchdown in the corner after a flowing move from the Champions.

Stormers flanker Hacjivah Daymani would add another try after a good steal from the pack in midfield was spread wide and the speedy forward had a comfortable run in to the line to rub salt into the wounds for Connacht.

Connacht did rally towards the end and replacement prop Jack Aungier opened his account for Connacht with his first try as a consolation score for the visitors with ten minutes left on the clock.