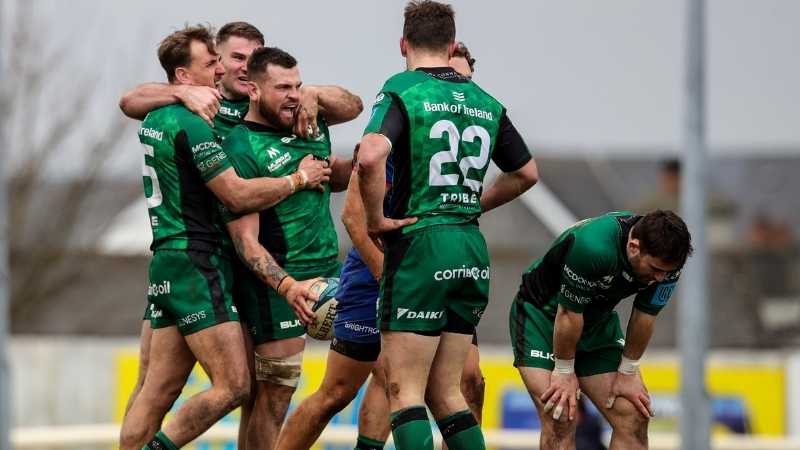 A late try by Peter Sullivan helped Connacht weather the DHL Stormers this afternoon, picking up a 19-17 win at The Sportsground.

The power and size of the visitors was too much to handle at times, but it was exactly the result Andy Friend wanted for their hopes of Champions Cup Rugby next season.

Tries by Paul Boyle, Tom Daly and Sullivan was enough for a two point winning margin, as they had to come from behind in a frantic afternoon, where the Galway weather let it’s feelings known.

The visitors had led at the break 10-7, then built on that time lead after the restart to push to 17-7 clear, two yellow cards later and Connacht managed to punish them for two well taken tries.

It was all Connacht for the opening quarter, but the Stormers defence was proving difficult to get through, the hosts again guilty of turnovers as they lost possession numerous times short of the line.

On their first attack of the afternoon, the Stormers managed to cross for an unconverted try, all coming from a terrific lineout maul, which slowly marched closer to the Connacht line, they ran several phases as the defence stopped them in their tracks, but they eventually offloaded wide where Sergeal Petersen, managed to cross over for a 5-0 lead after 19 minutes.

Connacht immediately hit back after going behind, but were again thwarted at the final stages, Stormers managing to put bodies in the way to deny Connacht a scoring opportunity.

The hosts eventually got their just rewards before the half hour mark, Boyle managing to cross for their opening try, intense pressure on the visiting try line after numerous phases and two penalties, Boyle somehow squeezed his way through to score, the conversion from close range by Conor Fitzgerald gave them a two point lead 7-5.

Out of absolutely nothing Stormers added a second try just before the interval, a kick by Manie Libbok was chased well by Petersen, he kicked past Fitzgerald and John Porch who failed to gather the loose kick, as the visitors pushed for the line it was Damian Willemse, who powered over to make it 10-7 at half time as their second conversion missed the mark.

After the restart another Connacht error saw them concede their third try, Kieran Marmion spilling the ball which was gathered by Libbok,the fly half ran almost 70 metres unchallenged before he crossed for the try, his conversion giving them a 10-point lead after 48 minutes.

Cian Prendergast looked to have Connacht back into the tie, after he crossed over in the corner temporarily making it a five-point game, but a knock on in the build saw gave the TMO an easy call to bring play back for a scrum.

Petersen was shown the sin bin after 56 minutes, the full back penalised after a deliberate block down of a Connacht offload. It would not take long before The Westerners made the man advantage count.

Daly crossed for their second try before the hour mark, a wonderful break clear by Caolin Blade started the move off, he offloaded to Fitzgerald who evaded the challenge well, he delivered a beautiful pass for Daly to score, another conversion by Fitzgerald made it a three point deficit 17-14.

Further ill discipline saw Rihanna Nel also shown a yellow card after 67 minutes, a high challenge on Fitzgerald that bordered on a red card but the TMO judged the collision to be a yellow.

As Stormers were again down to 14 men, it was another opportunity for Connacht to strike, Sullivan came back on due to a HIA on Fitzgerald, they attacked with intent and after 72 minutes Sullivan crossed in the corner, the TMO said the grounding was good for the final score of the contest.