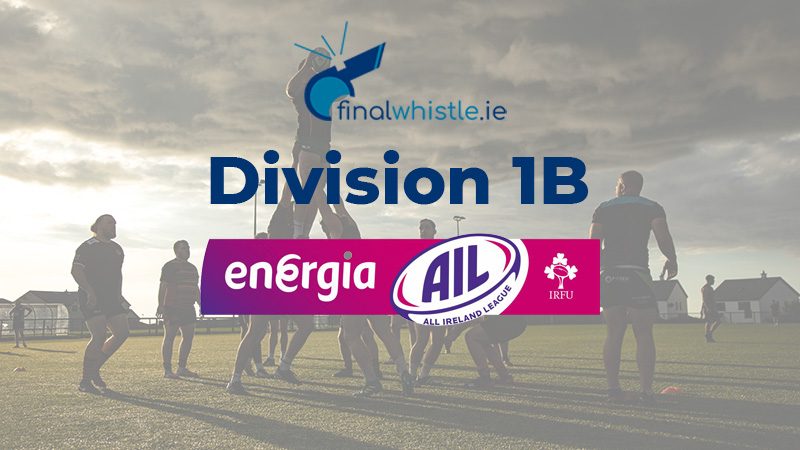 1B never disappoints, it’s always competitive, exciting and well worth keeping an eye on if you enjoy club rugby. The shock of the weekend came at Rifle Park where Banbridge beat Buccaneers 43-15. City of Armagh became league leaders.  Highfield, Old Belvedere and Old Wesley continued their winning ways, with good victories over the weekend.

Banbridge have been struggling this season, finding wins has been few and far between for them. On the other hand, Buccaneers have looked strong all season, winning eight out of their previous ten AIL contests.

We always say that any team on their day can get a win in this division. The teams are all somewhat evenly matched, Banbridge proved that with a big 43-15 victory over Eddie O’Sullivan’s men. Ulster player and former Ireland U20 player David McCann secured a brace for himself in the six try victory.

It was an uncharacteristic performance from the Connacht men who couldn’t get firing on the day.

Old Wesley managed to do the double over their Dublin neighbours this season, getting an impressive 21-30 win over St Mary’s College,

There was only three points in it at the halftime interval, with the visitors leading 7-10. Coming into the game, Old Wesley were the inform team, whereas St Mary’s were on the opposite end of the scale, on a bit of a losing streak.

They scored three tries each. But it was the penalties of Josh Miller and Ian Cassidy that made the difference on the scoreboard. Sean Cronin’s team now sit further back from the leading pack, a group that Old Wesley are firmly involved in.

City of Armagh dispatched of Naas in clinical fashion, making a real statement of intent that puts them at the top of the league table.

City of Armagh fullback Shea O’Brien was the star man for his team. He made a 17-point contribution. Andrew Willis, Ryan O’Neill and Matthew Hooks got the other tries. That is their seventh win in a row. A remarkable run of form in such a tough division.

For Johne Murphy’s men the struggle continues. They are still stuck at the bottom end of the table.

Highfield deserved their 10-34 victory over Cork rivals UCC on Saturday.

Highfield were strong favourites going into   this game and they did not disappoint. They ran in five tries on their way to victory. Travis Coomey, Sean Garrett, Luke Kingston, Ben Murphy and Gavin O’Leary scoring the all-important tries for the visitors.

Things seem to be going from bad to worse for the students, who made such a promising start to the season.

Old Belvedere seem to be hitting all the right notes at the moment, picking up their fourth consecutive win.

Hooker Callum Dowling is becoming a constant on the try scorers list this season. He scored again against Malone. Their captain James Bollard also got over the line for a try.

Mark McGlynn got the only Malone only try. They stay at the bottom of the table.