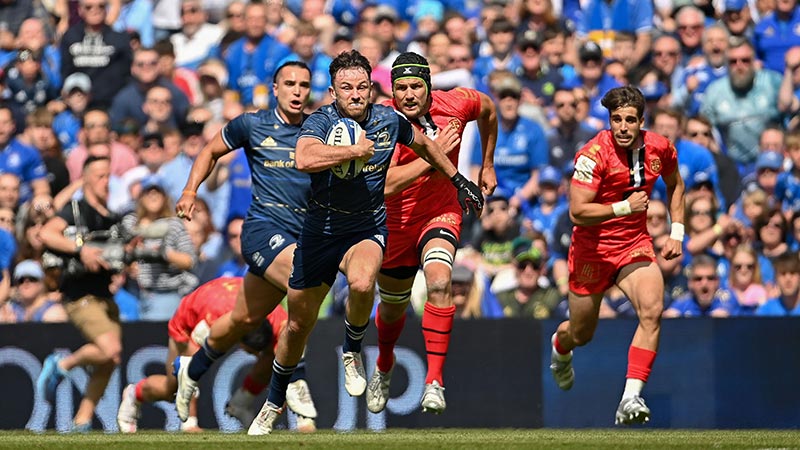 James Lowe scored two tries as Leinster blitzed Toulouse in a 40-17 win at Aviva Stadium to reach their first Champions Cup final since 2019.

Lowe has been in superb form throughout this postseason run, scoring eight tries in four games and played a starring role as Leinster booked their trip to Marseille in two weeks time.

Leo Cullen’s team will be keeping a close eye on Racing 92 and LA Rochelle, who play tomorrow afternoon in Lens as they head to Marseille looking to tie Toulouse with five titles in Europe’s elite competition.

Johnny Sexton often saves his best for Toulouse and today was no different. Ireland’s talisman was at the forefront of everything Leinster did, as he registered three try assists and kicked 15 points to send Leinster to their sixth Champions Cup final.

However, the win came at a price as Leinster lost both Tadgh Furlong and Ronan Kelleher to injury. Furlong linked off after 17 minutes, while Kelleher exited just after halftime with a head injury. Cullen will be nervously waiting for news on their fitness.

As for Toulouse, they were looking for their third Irish scalp in this tournament, but this proved to be one step too far for the defending champions, who came into this game off the back of their taxing penalty shootout win over Munster. Ugo Mola’s men were never at the races as Leinster came flying out of the blocks.

Leinster started strongly as Sexton gave the hosts an early lead with a penalty. It didn’t take long for the defending champions to respond after Antoine Dupont opportunistically picked up a loose ball to run in from 95m out to give Toulouse a 3-7 lead.

That proved to be as good as it got for the visitors as Sexton added his second penalty of the game, before releasing Lowe on the inside for his first try of the game minutes later. Leinster’s deficit soon became a 13-7 advantage.

Leinster were in the mood for attack throughout the first half and soon had their second of the game soon as Josh Van Der Flier crashed over for the second successive week. Sexton converted again to make it 20-7. Thomas Ramos and Sexton traded penalties to make it 23-10.

However, things went from bad to worse for the visitors as Emmanuel Maufou was sin-binned for taking Jameson Gibson-Park off the ball.

Toulouse survived the sin-bin without further damage, but the resistance broke after the break as Lowe added his second try of the game to make it 30-10.

The French giants briefly threatened a fightback as Tolofua powered over from the back of a driving maul to make it 30-17. But all hope soon evaporated as Ross Byrne added a penalty in the dying minutes, before Hugo Keenan added a fourth try for the province to put a bit of gloss on the score-line.