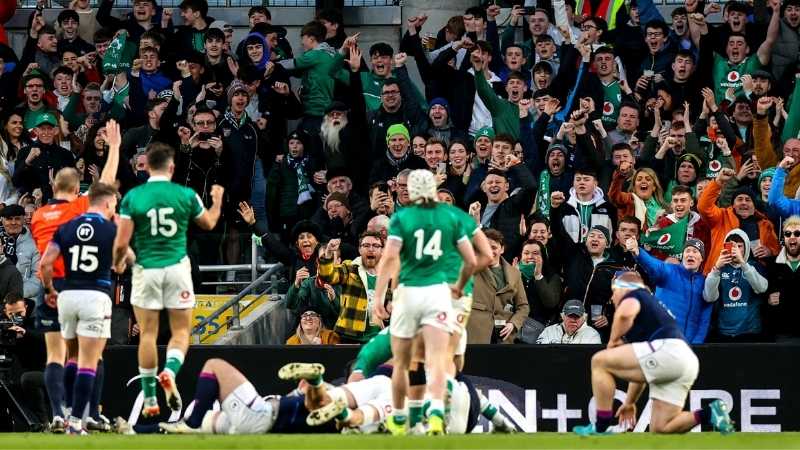 Ireland ended their Six Nations campaign with a 26-5 victory over Scotland at the Aviva Stadium to take the Triple Crown.

Scotland began proceedings slightly better with the dangerous back duo of Rory Darge and Hamish Watson seeing plenty of the ball inside the first quarter of an hour.

Despite the early Scottish possession, it was Ireland who struck first after 18 minutes.

Big carries from Tadgh Furlong and Caelin Doris resulted in an Irish penalty inside the Scotland 22 metre line. Sexton opted to kick for the corner, leading to an Ireland lineout on the 5-metre line.

The home pack opted for a maul, pushing Scotland back behind the try line before Dan Sheehan dived over the line for the game’s first score.

Sexton added the extra two from a penalty to extend Ireland’s lead.

Just minutes later, Andy Farrell’s men doubled their lead after Cian Healy drove over the line from close range to score Ireland’s second of the day.

Scotland did reply with just over five minutes remaining in the first half. After phases of possession, Pierre Schoeman picked the ball from the back of the ruck on the Ireland 5 metre line before fending off Irish tackles to reduce the deficit.

Out half Blair Kinghorn missed the follow up conversion from a relatively central position to send the sides into halftime with the hosts leading 14-5.

Ireland had plenty of possession and territory inside the first ten minutes of the second period, but it was the Scotland captain Stuart Hogg who almost scored the half’s first try.

Hogg ran onto a grubber kick from Blair Kinghorn before kicking it past James Lowe. Hogg looked set to dive over the line, but it was his opposite number Hugo Keenan who produced a fantastic tackle to put Hogg into touch.

Ireland did find their first score of the half midway through the half after phases of carries from Sheehan and O’Mahoney before some quick thinking from Jamison Gibson Park released Josh Van Der Flier who burst over emphatically to stretch Ireland’s lead to 16 points.

The home side sealed the bonus point in the final minute when James Lowe popped the ball into the path of Conor Murray who managed to plant the ball beyond the try line to seal the Triple Crown.