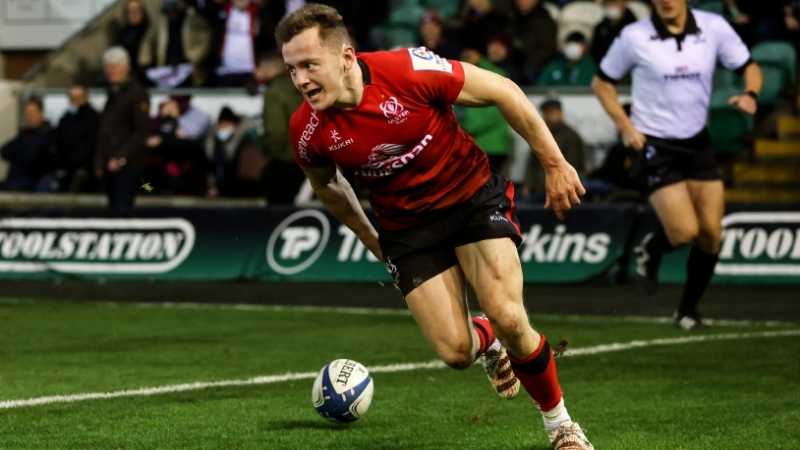 Michael Lowry crossed for two tries as Ulster booked their place, in the knockout stages of the Heineken Champions Cup, after a 24-20 bonus point win over Northampton Saints this afternoon.

Lowry was influential for the Ulstermen from fullback, his two tries along with tries from Robert Baloucoune and Nathan Doak, giving them their third win of the season in the competition.

Saints struggled in the reverse fixture in Belfast, and could not handle the power and speed of the Ulster backline once they were given the space. Ulster now meet Clermont Auvergne next week.

Despite a late try for Northampton, the Irish province held their resolve to claim a four point win, the result exactly what Ulster deserved having led from the early stages, Northampton could not get a foot in to lead the tie.

The northern club took the lead on the sixth minute mark, great play by Doak started off the chance at goal, he was tackled short of the line with the ball knocking backwards, Baloucoune the quickest to respond to the loose ball, he evaded two tackles before crossing in the corner for an early 5-0 lead.

Doak increased the lead further in the 14th minute as he finished off a Baloucoune attack, the winger with a great solo effort toward goal before offloading to Doak, the scrum half crossing with ease to make it 12-0.

Dan Biggar had Northampton on the board in the 19th minute, he landed a short range penalty to cut the deficit to nine points. He added to his points haul in the 37th minute, finishing off an attack after Courtney Lawes brilliantly turned over possession, the final pass to Biggar looked forward but the try and conversion stood, making it 12-10 with minutes left in the half.

The Ulstermens response to the try was quick and direct, Billy Burns kicked the restart and after a couple of phases, Michael Lowry had the ball touched down beside the posts, a quick TMO ruled a knock on had not occurred to rule out the try, Doak adding the conversion to make it 19-10 at the interval.

Biggar kicked Northampton within six points of Ulster four minutes after the restart, a Lowry knock on had them on the back foot early in the second half.

In similar fashion to the opening half, we had long spells without a score as both teams held their defensive resolve for large spells. Saints struggled to gain ground on the six point deficit, with Ulster patient and disciplined in their defence.

Lowry crossed for his second try to get the bonus point just after the hour mark, he received a quick offload by Ethan McIlroy to burst free down the wrong to cross over, Northampton down to 14 men as Alex Mitchell was sent to the sinbin, Ian Madigan missing his first kick of the season for Ulster, the score 24-13.

After the fourth Ulster try, Northampton huffed and puffed to try and get something from the final twenty minutes. They managed to find a gap in the defence late on as Rory Hutchinson scored a late try with 78 minutes elapsed on the clock.

Ulster were patient to turnover possession shortly after the restart, not guilty of committing any fouls before booting the ball out of play as the clock ticked into the red. A fantastic win sees them become the top ranked Irish team in the competition.