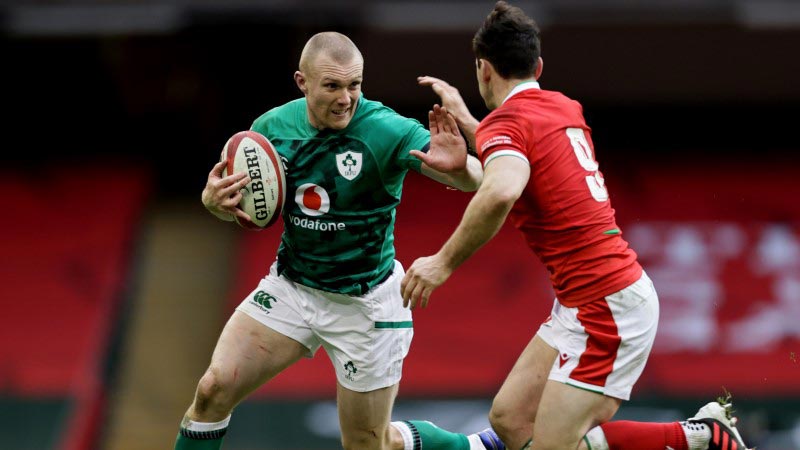 A moment of madness from Peter O'Mahony would prove to be the major talking point of a disappointing day for the Irish in the Principality Stadium in Cardiff for an opening day Six Nations defeat to the Welsh.

A loose left arm while clearing out a ruck made impact with the face of Tomas Francis and after the intervention of the TMO the Munster man found himself in receipt of the first ever Irish dismissal in the Six Nations.

Despite the setback, Ireland forced themselves into contention until a bizarre ending with a sliced kick from replacement fly-half Billy Burns denying a last gasp chance for Ireland to snatch a deserved victory against all the odds.

After a quarter hour of this game in Cardiff few would have predicted what was to follow as O'Mahony left the pitch and Leigh Halfpenny repeated his penalty score to leave the Welsh 6-0 ahead.

The deduction to 14 men actually seemed to spur on the Irish for the remainder of the first half with fantastic work from the Irish pack set up two penalties for Johnny Sexton before a great break behind the Wales defence from centre Robbie Henshaw who offloaded to Josh Van Der Flier who was tackled just short of the try line.

A pick and go from Tadhg Beirne saw the Munster man crash over the line with a Sexton conversion putting the away side a score ahead at the interval.

The Welsh looked to be in control in the second period where the energy levels of 14 man Ireland was dipping and it allowed two tries for the home side from George North and a spectacular precision diving score into the corner from young prospect Louis Rees-Zammit.

Halfpenny scored his third penalty of the evening after a contentious decision from match referee Wayne Barnes to harshly penalise Tadhg Beirne for coming into the side of a ruck to put make it a two score game.

Ireland rallied well and took advantage of some territory to allow Billy Burns to score a penalty to reduce the difference to five points and the potential to grab a victory.

While many will focus on the sliced kick from Burns in the final passage of play but it was a bizarre decision by Wales to kick away possession with seconds on the clock which created that unexpected opportunity in the first instance.

Burns will face scrutiny for that rookie mistake but it was a disappointing day kicking out of hand for both number 10's during the 80 minutes and it will leave Andy Farrell with a number of headaches for next season with Sexton amongst a number of players who left the field with suspected head injuries.

Despite the result it was a very positive performance from the game from an Irish point of view. Even being in contention at the death, after playing 65 minutes without Peter O'Mahony, was a huge lift for Ireland and will give Farrell and his team much to take into next week's clash with France.