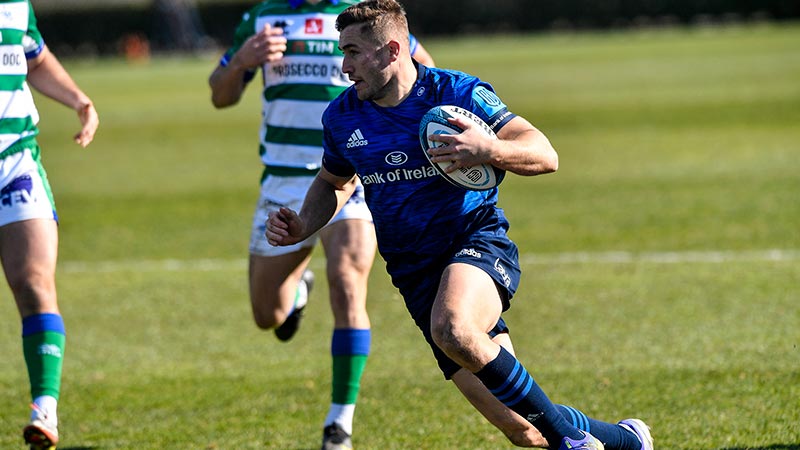 Leinster came out on top with a strong bonus point win against Benetton at the Stadio Monigo.

While the home team proved a strong defence in the first half, a solid performance from Jordan Larmour and Sean Cronin quickly saw the tries add up.

Whatever defence Benetton had was lost after the 40 minutes as Leinster widened the gap thanks to a series of penalties from the hosts.

With Leinster second on the URC table and Benetton sitting at 11th, it was an expected win from the visitors. An overpowering Leinster side was initially held up by strong defence. A series of phases by Leinster strong carries from Jordan Larmour, quick hands to O’Brien and a good support line from Osborne resulted in an unfortunate knock on. A quick turnaround saw a line break from the visitors and a Luke McGrath pass out to a waiting Ruddock was once again stopped by the home side.

The defence slipped at the nine-minute mark, as a pick from Larmour's carry saw Max Deegan with the first try of the match and his fourth of the season. A steady foot from Ross Byrne marked the first of many conversions from the number 10. However a lineout and a missed interception from Harry Byrne saw Benetton’s first points on the board with a penalty taken by Rhino Smith.

Benetton remained fighting against Leinster but struggled to get hands on the ball. A series of slow phases saw Leinster give away a penalty for not releasing but the ball was quickly turned over, letting Leo Cullen’s side back inside the 22. Another penalty given away by Benetton for a high tackle on Cronin saw the latter get over the line after a strong maul from the pack.

Larmour added more points to the board minutes later after a successful lineout and a decoy run by Harry Byrne which saw the winger get straight under the posts. A back to back break and a series of quick hands through the backline looked like another chance for Larmour but it was just held up.  A lovely pick from Dooley on his 100th appearance for the province brought Leinster metres from the line but it was once again turned around by the Benetton side.

The partnership of Tommy and Jimmy O’Brien saw Leinster quickly back in the 22’ after a great run and series of carries. Scott Penny hit Ruddock with a quick pass and Cronin was held up just on the line. A tired defence from the home team at just 35 minutes saw Ruddock hit Ross Byrne on the blind side, securing the bonus point.

A last minute effort from Benetton saw a chance for the team but it was turned over after a great interception and carry from front row Ross Maloney, ending the first half once again with Leinster possession.

Benetton’s initial tight defence and Leinster’s initial patience both changed into the second half as the former's defence slipped, and the visitors side settled in, quickly getting inside the 22’. A try saving tackle from Jimmy O’Brien stopped a chance for Benetton and saw the first of many penalties from the home side just minutes later.

Cronin’s second try came at the 47 minute mark after a dropped defence from Benetton. However an opportunistic try came for Benetton straight after Byrne’s conversion as 20-year-old Piatella got through a clear gap from the lineout.

Both sides made a series of changes but it was Tracy on for Cronin who made a significant impact, picking up where the hooker left off with a try off the maul. Another successful conversion from Byrne and the gap widened between the two teams as Leinster held all possession.

A blocked down kick from the Leinster side saw a series of sloppy phases from both teams inside the 22’ followed by a successful lineout from Benetton saw a penalty advantage for Benetton and the first of their possession in the second half. Two forward pods and a flat pass out to Trudi on the wing looked promising for Benetton but was quickly turned over by a steal from Dan Leavy.

A lovely line from Leinster with 15 minutes to play saw Ruddock offload to a waiting Jimmy O’Brien for another try straight under the posts. A great restart from Leinster once again saw them in the 22’ after a carry from McCarthy. Kearney came off the bench with a great carry and pass out to Ruddock and McCarthy.

A big tackle from the defensive side brought the latter down but Leinster’s quick pick and go play resulted in a knock on interception from Rhino Smith. A penalty lineout saw Tracey with his second try of the match. Byrne missed the first of his conversions, hitting the post but still earning himself a well-deserved player of the match.

With just minutes to go a bad ball off the Leinster lineout saw an easy run for Cannonne, adding five points to the board for Benetton. A conversion from Smith helped the scoreboard but didn’t do much for the Benetton side whose second half saw them overpowered giving away a series of penalties and missing too many opportunities.

A lot of missed tackles from Benetton inside their own 22’ meant it was all too easy for Leavy to pass out to O’Brien, sealing the deal for Leinster with a final try of the game.

An expected win from the visitors but a series of penalties and unattempted tackles will be a talking point for the Benetton side.