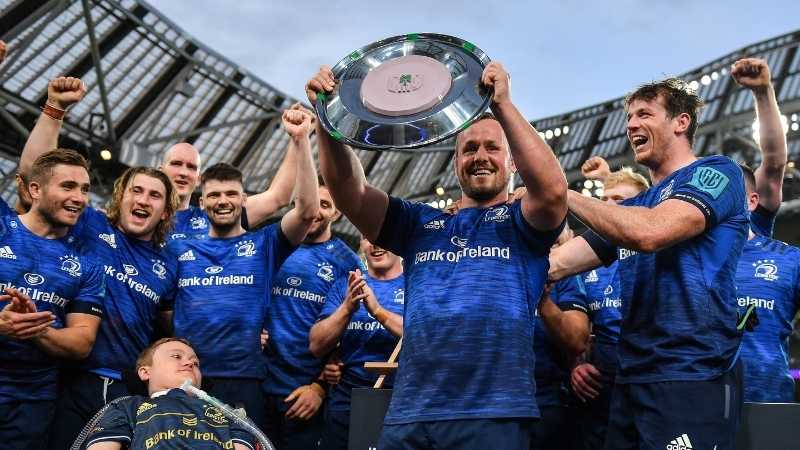 Munster saw their hopes for a home quarter-final dashed, as they fell to an under-strength Leinster in a 35-25 thriller at Aviva Stadium in the United Rugby Championship.

Despite resting a number of key first team players, Leinster produced an attacking masterclass as they earned their eighth win in nine against Munster, and ensured they did the double over Johann Van Graan’s team for the third time since 2017.

The United Rugby Championship regular season came to an enthralling and a fitting conclusion in Dublin, as the two rivals combined for seven tries at Aviva Stadium.

Munster were faced with a tough task heading into the weekend, having not won in Dublin in the regular season since the 2014-15 season. But an already tough task was made just a little bit harder, as the Bulls defeated the Ospreys last night and the Stormers grabbed a late winner against the Scarlets in Llanelli.

Munster’s quest got off to the worst possible start as Scott Penny scored for Leinster in the first two minutes. Harry Byrne extended the hosts lead minutes later as he slotted over a penalty to make it 8-0.

However, Van Graan’s men fought back quickly and scored two tries in quick succession with Jack O’Donoghue and Mike Haley crashing over to earn the visitors an 8-12 lead.

Leo Cullen’s team weren’t to be denied though as Cormac Foley scored a delightful try moments later. But delight soon turned to despair for the hosts, as Ciaran Frawley exited with a head injury and Rob Russell was sin-binned for an intentional knock-on moments later.

Munster capitalised on their numerical advantage to begin the second half, as Conor Murray scored the team’s third of the evening. Byrne and Joey Carbery traded penalties to leave Munster with an 18-22 advantage.

However, that proved to be as good as it got for Munster as Leinster were awarded a penalty try. Niall Scannell illegally collapsed a driving maul, and was handed his marching orders for his troubles, leaving Munster with 14 men.

The defending champions quickly capitalised on the advantage as Rory O’Loughlin scored on potentially his final outing for the province, before Byrne iced the game with his third penalty.

To compound matters for Munster, Johann Van Graan has been left with a number of fitness headaches. Andrew Conway, Alex Kendellen, Tom Ahern and Jack Daly were all forced to leave early due to injuries, leaving Van Graan with a number of worries ahead of their trip to Belfast in two weeks time.