Jaminet Hits 15 To Inflict Another Defeat On Munster 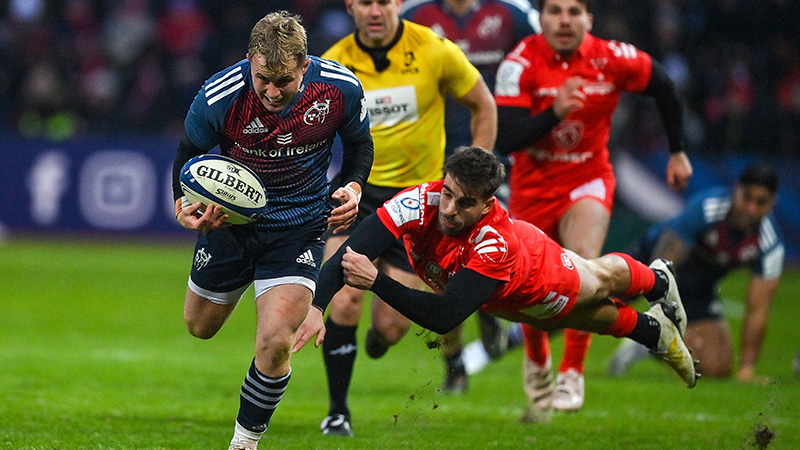 The boot of Melvyn Jaminet was enough to keep Toulouse unbeaten in the Champions Cup having edged another titanic battle with the Irish province this afternoon.

They have done enough to make the last 16 stages of the competition but will know they could have easily taken victory if not for some penalties given away for mistakes along the way.

Tries from John Hodentt and Tadhg Beirne gave Munster great hope of taking something out of a difficult venue to go and win a game but Jaminet had other ideas.

Munster started on the back foot and found themselves behind inside two minutes,  Melvyn Jaminet opening the scoring with a long range penalty, it got worse for the visitors inside those opening ten minutes, the hosts with a clinical attacking move that saw them blitz out wide as Juan Cruz Mallia got over in the corner for their opening try having evaded the tackles of Shane Daly and Mike Haley, Jaminet unable to convert but the hosts were 8-0 ahead after just seven minutes.

All Toulouse in the early stages and after Munster were caught offside, Jaminet was successful again from the kicking tee to make it 11-0 as the clock ticked into the 16th minute with Munster having their backs to the walls.

Munster had very little opportunities to craft scores, Calvin Nash knocked on attempting to gather an up-and-under from Craig Casey which didn't travel far, minutes earlier they had a chance before the second penalty but were unable to gather possession.

A slight momentum change saw Munster get a penalty, after kicking to touch their line out did the job but some favourable bounces allowed Julien Marchand to secure a vital turnover for Toulouse.

The visitors kept building as some big hits were going in, another penalty was called as Alexandre Roumat went off his feet and Joey Carbery opted for the corner, a trademark move as the Munster regard did the donkey work to [power their way against the French defences and John Hodentt managed to dot over to put Munster on the board, Carbery unable to add the extras.

Carbery would have another chance at the posts five minutes later shortly after Munster had a scrum penalty go their way, they got another call for a penalty and this one was in a kickable distance for the fly-half to dissect the posts, 11-8 after 35 minutes.

It was back to the walls for Munster in the final exchanges before the half time whistle sounded, resisting wave after wave of intense Toulouse attacks as the visitors produced a monumental turnover to secure possession right in front of their own posts, in the final act of the opening half.

Munster made a solid start to the second half having had plenty of the ball they forced Toulouse into a knock on on their own 22, the scrum itself needed resetting several times before Malakai Fekitoa made a rampaging carry through midfield, it gave them ground to move before eventually Carbery had to kick behind to try exploit the French backline.

Fekitoa made another strong drive and a clever pop pass by Gavin Coombes in the tackle allowed Shane Daly to scamper down the wing, he passed it back inside for Craig Casey who exploited the space and drove at the Toulouse defence, dodging tackles including a roly poly move to keep possession and make up more ground, with a penalty advantage coming Carbery opted for a cross-field kick, in the end Nash would provide the pass for Tadhg Beirne and the latter powered over the whitewash for their second try in the 50th minute, another failed conversion but Munster moved ahead for the first time 13-11.

The lead lasted seven minutes as again Jaminet was successful from the tee this time from close range as Munster were penalised for not releasing in front of their own posts, Ben Healy was summoned off the bench and on the hour mark glided over his first attempt at goal to put Munster ahead 16-14 as their pressure paid off to see the hosts be penalised.

But again Munster were penalised for their lack of discipline and once again Jaminet made no mistake as Ben Healy found himself sent to the naughty step in the bin for ten minutes, with that Munster were lacking in the numbers department and another penalty minutes later made it a four point cushion as Jaminet was having a field day.