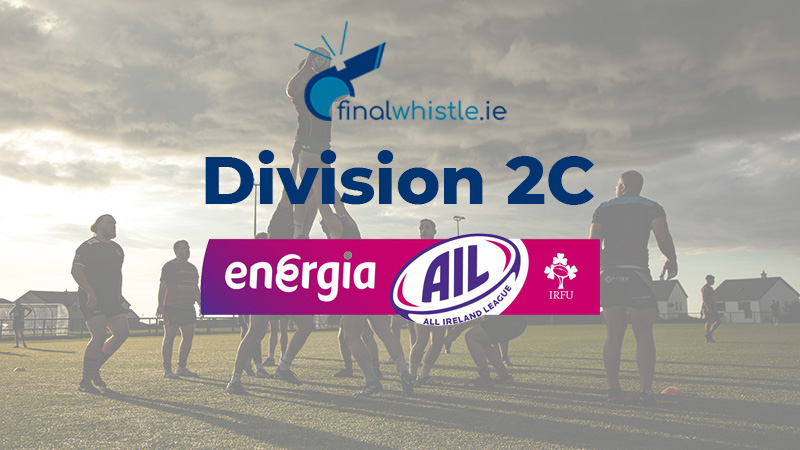 Different week same story in 2C as Instonians remain unbeaten at the summit, Bangor and Bruff both gain ground in the table, while Tullamore but a gap between them and Skerries.

A strong opening half performance laid the groundwork for Instonians to continue their winning streak in 2C with a bonus point win over Clonmel.

It took until almost the 15 minute mark for the games opening score, a smart piece of play by the league leaders resulted in Zak Davidson getting over for an early try, Jonathan Milliken adding the extras for a 7-0 lead. Remaining ahead the half was tight but minutes from the end Rhys O’Donnell got over for their second try, as they took a 14-0 advantage into the break.

The visitors continued their dominance into the second half, Bevan Prinsloo managing to get past the Clonmel challenge for a third try. Clonmel responded with two bonus point tries to cut the gap to seven, setting up a close finish to the game, but Matthew Kilpatrick had other ideas, as he dove over for the bonus point try seconds after Clonmel added the second try.

In a tightly contested stalemate on Leeside, Ballina picked up some valuable points as they looked strong but were held by Midleton in the end.

All action once the first whistle was sounded, a breathless opening first half that saw all scores coming in that period. Ben Matheson kicked Ballina in front with an early penalty before Midleton hit back to level matters. Midway through the half Ronan Molloy scored a breakaway try and the conversion was good for a 10-3 lead.

The visitors stretched the lead out to 13-6 and just as it looked like they would take the lead into the break, a kick-through produced a converted try for the hosts to tie the game. The second half was fiercely fought but in the end neither could snatch the contest.

Bangor ended their recent poor run of form with a late penalty try giving them the win over Ulster rivals Omagh.

Accies started the better with captain Ryan Mitchell giving them an early 5-0 lead as he managed to get over, Bangor replied and would lead 7-5 by the break, managing to cross under the posts.

Josh Kyle kicked the hosts into an 8-7 lead shortly after the restart, starting the second half on a positive note, their momentum allowed Deane Keane to touch down in the corner, as they pulled 13-7 clear of their opponents. A late penalty try allowed Bangor to snatch the points at the death, a cruel end for Omagh having looked so sharp throughout.

It took until the second half for the game to kick into life, but Bruff managed to move up to fifth coming out on top of the Munster derby at Musgrave Park.

A stalemate opening half, but both teams showed determination to try and edge ahead early, Fabian Loughrey kicked them 3-0 ahead, but Bruff replied through Paul Collins as he slotted home a penalty after Well were reduced to 14 men with a sin bin against Harry McHenry.

Bruff made use of the man advantage to score the deciding try in the contest, Warren Loulanting the man to get over for the score, as Collins capped off a strong day from the tee with the conversion, five points for the Bruff man.

A late penalty gave Tullamore their sixth win of the season, as they had to come from behind late on to defeat a strong Skerries side.

The visitors controlled the opening half, John Waters crossed early for a converted try, while penalties by Shane Murphy and Ronan Mulcahy extended the lead to 13-0, a strong breeze making life difficult, Tullamore ended the half with their first score off the tee to trail 13-3.

A try early in the second half put pressure on the goats as Tullmaore made it a three point game, they kept on top and notched another try but this one failed to be converted as they moved 15-13 ahead. Mulcahy had Skerries a point ahead with another penalty off the tee, but it was Tullamore who forced the error and landed the deciding score late on.