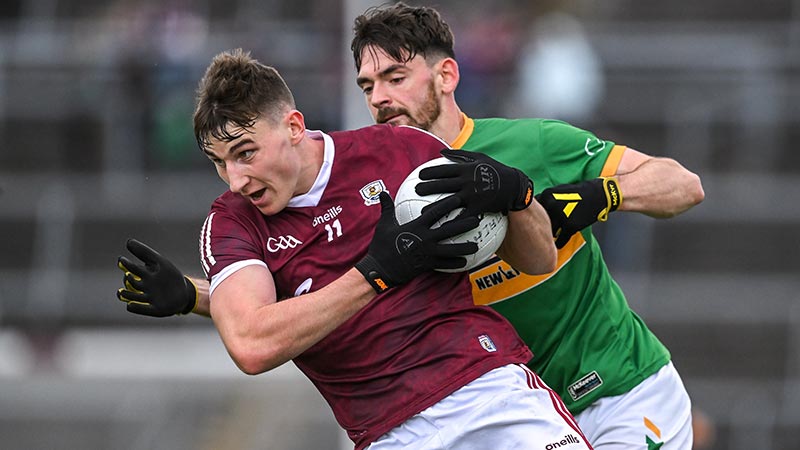 Galway comfortably advanced to the Connacht Championship decider with a 23 point win over Leitrim, who failed to cause an upset at Pearse Stadium today.

The defensive plan from Andy Moran worked in the early stages as Leitrim frustrated Galway with turnovers. However 20 minutes in they started pull away after sorting out their poor shot selection with Cillian McDaid scoring a brilliant 0-3 and Shane Walsh scoring the same amount in the first half

The Tribesmen scored four second half goals to build on a 0-12 to 0-5 half-time lead, as Patrick Kelly, Niall Daly and Owen Gallagher all hit the net rounding off a forgettable afternoon for Leitrim as the game finished a whopping 4-20 to 0-9.

There were no surprises this afternoon at a windy Salthill as Padraic Joyce’s team reach another provincial final. Everyone knew how Moran would have to set Leitrim up but in the opening minutes it was effective as his side were level with 13 minutes gone thanks to disciplined man-marking.

Early points from Donal Wrynn and Ciaran Cullen had them up by one and as the hosts struggled for shot selection and the Wild Rose County found an air of confidence. However this was partly down to the breeze troubling Galway and soon they would pull away into expectancy.

Three long-range points from an exceptional McDaid proved to be the perfect weapon to combat the visitors’ deep defence. 0-2 from his midfield partner Paul Conroy and Walsh’s trusty frees got Joyce’s men into rhythm.

Ryan O’Rourke’s 0-2 and a Conor Dolan point made it a respectable first period for Leitrim. It was 0-12 to 0-5 at the break, which was probably already too big of a gap for the away team.

Substitute Patrick Kelly had a productive day after coming on in the first half and kicking a score as well as finding the game’s first goal straight into the second half. From this moment it really became a non-event.

It headed into a period where Walsh picked away with more accurate frees and the Salthill outfit began to relax. Kelly made his tally 2-1 scoring again in the 52nd minute and Joyce began to take off some key men with Roscommon in the final being a certainty at that stage.

Niall Daly got a third goal after a lovely sequence of passing and points from Dessie Coneely and John Daly followed. Owen Gallagher’s goal at the death made it 4-20 to 0-9.

Points from Leitrim’s Keith Beirne helped them take four points in the second-half but ultimately they couldn’t deal with Galway’s plethora of 12 scorers and the Tribsemen reached the JJ Nestor Cup final with ease.

They meet the Rossies on May 29th.