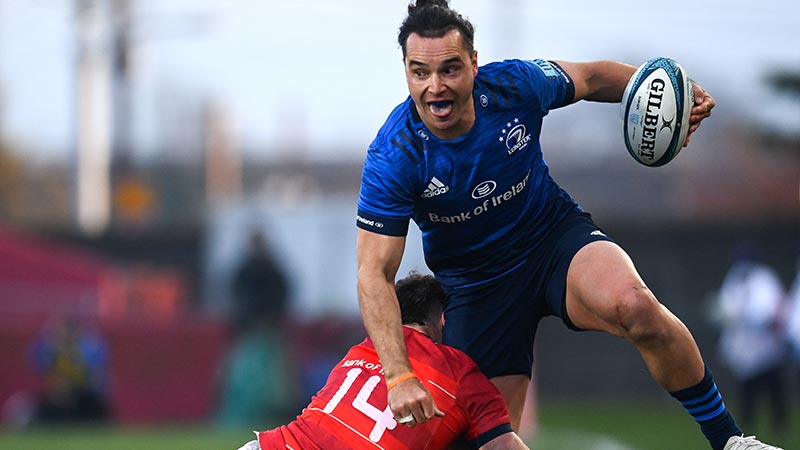 Leinster will travel home from Thomond Park with a bonus point win after overcoming Munster 34-19 this evening.

Tries from Garry Ringrose, Jimmy O’Brien and a brace from James Lowe extended Leinster’s lead at the summit of the URC table.

Both side’s traded penalties inside the first quarter of an hour, with Joey Carbery levelling the scores after Ross Byrne’s opening score.

Leinster found the game’s first try after a brilliant move from Leo Cullen’s side, which began at a lineout on the half way line. After James Lowe and Ringrose linked up, Leinster worked their way deep into the Munster 22.

After phases of knocking on the Munster door, Ross Byrne played an excellent pass out to captain Garry Ringrose who crossed for a try.

The hosts replied with some good possession and territory of their own, with Gavin Coombes and Peter O’Mahony involved heavily.

The Munster pressure led to a penalty inside the Leinster 22. Carbery made no mistake and reduced Leinster’s lead to 2 points.

Byrne and Carbery continued their battle from the tee with both out halves keeping their side’s scores ticking over and put Leinster 11 points to 9 ahead.

Munster were dealt a huge blow when Gavin Coombes went off following an ankle injury sustained in the ruck. Despite this, Munster took the lead for the first time in the game through Joey Carbery’s fourth penalty of the game, three minutes before half time.

With time clicking into the red zone, Leinster raised the tempo and added another penalty from Ross Byrne to send them into the interval with a 14-12 lead.

Leinster struck first in the second half after a strong scrum on the Munster 22. Henshaw spread the ball wide into the path of James Lowe who finished well past Calvin Nash in the corner.

Leinster found their third try of the evening when centre pairing, Robbie Henshaw and Garry Ringrose showed brilliant handling before offloading to James Lowe. Lowe then offloaded to Jimmy O’Brien who went over for his 8th try of the season.

Munster’s replacements lifted the Thomond Park crowd with Thomas Ahern and Alex Kendellen making big contributions deep in the Leinster half. Ben Healy then showed great composure to pop the ball into the path of Damian De Allende who found Munster’s first try of the game.

Leinster wrapped up the bonus point with just over five minutes remaining after another brilliant finish from James Lowe.