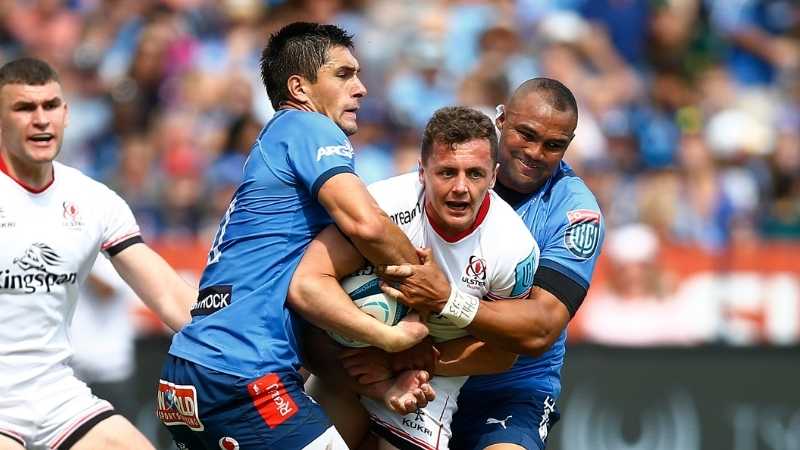 Ulster suffered back-to-back defeats for the first time this season as a second-half blitz from the Vodacom Bulls saw them fall to a 34-16 loss at Loftus Versfeld Stadium.

Scores from former Ulster flanker Marcell Coetzee, Madosh Tambwe, Johan Grobbelaar and Kurt-Lee Arendse helped the South Africans to a bonus-point success, which also condemned Dan McFarland's side to a winless tour of the southern hemisphere.

The visitors had led at half-time through three penalties from Nathan Doak, but the heat and high altitude in Pretoria played a significant factor after the break, as did a yellow card to Ulster lock Kieran Treadwell just before Grobbelaar's try.

Doak notched his first penalty in the 10th minute, but they perhaps would have been disappointed they didn't have a try to show for their efforts after three line-outs just five metres from the Bulls line.

Chris Smith then levelled proceedings with his only penalty of the half, but the Irish province would lead by six points at the interval as Doak converted two more penalties, although he would miss one more on the stroke of half-time.

And after the restart the Bulls would assume control. Coetzee got them on the board when he charged through a ruck and over for a try, and then Tambwe capitalised on some inaccurate passing from the Ulster backs to go over in the corner to put them beyond a score.

Luke Marshall then made things interesting when he was sent over thanks to an excellent delayed flat pass from Ian Madigan to bring Ulster back within seven, but the TMO's intervention would swing momentum back against the Irish province.

Treadwell caught Arendse on the chin, despite it looking like he'd hit the ball first, which led to him seeing yellow and that allowed Grobbelaar to put the result beyond any doubt when he piloted the maul over the line off the line-out that resulted from the penalty.

Coetzee also saw yellow for a high tackle on Ben Moxham, which gave Ulster a glimmer of hope, but instead the Bulls would wrap up their bonus point when Arendse picked off a Doak pass and ran it the length of the pitch for the fourth try.