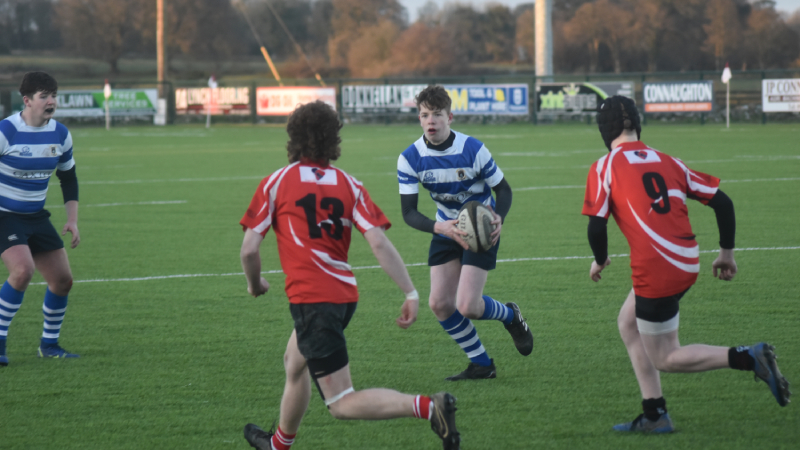 Summerhill College beat Garbally in a cracking display of rugby to ensure their spot in the Connacht Senior Cup last four this afternoon in Hamilton Park.

Both teams gave it everything in what felt like a real cup tie with the score changing hands on six different occasions. Five second-half tries saw both sides believe they could be victorious but Clyde Regan with five minutes to go got what turned out to be the game-winning score.

It was the Ballinasloe side that opened the scoring, with Joseph Tierney kicking off the tee between the posts to give his side a three-point lead coming up to the ten-minute mark in the first half.

Summerhill started to come into the tie after this, but Garbally were proving to be a solid well versed defensive unit. The first scoring chance for the Sligo score resulted from the pressure however a penalty at the 22 in front of the posts was light work for Oisin O’Neill who levelled the score just past the quarter mark of the game.

Kicking conditions for the first time in the tournament were favourable as O’Neill added a second penalty to put his side three points in the lead five minutes after drawing level.

The first try of the game came from Conor Harley for Garbally. The full-back stormed through the lines with speed and touched down to give his side a lead for the second time in the game. Tierney added the extra two, the last score of the half meaning Garbally were ahead by four at the break.

Summerhill came out of the break looking for blood, and inside four minutes of the half took advantage of early pressure. Ronan O’Heir offloaded to Stefan Roche who touched down which was converted by O’Neill to give the Sligo side a three-point lead once more.

Stefan Roche made it two tries in ten minutes as Garbally were rocked at the start of the half with O’Neill continuing to be perfect from the tee stretching the Summerhill lead out to ten points and now within touching distance of the last four.

Garbally recovered from the poor start to get their second try of the game just minutes later. A brave decision to tap and go from a penalty that was well within kicking distance proved to be a brilliant decision for the Ballinasloe side as Conor Harley went over the line from the resulting play for his second try of the game. Tierney was able to bring it back to a three-point deficit with plenty of time to play.

Conor Ryan used his great footwork in possession to shake up the Summerhill defence which allowed Shane Fitzpatrick to get in behind and score. This gave Garbally the lead once more in what was a superb display of character to come back from a poor start to the half. The kickers remained perfect with Tierney adding the conversion, Garbally now with a four-point lead having been behind by ten moments ago.

A cracking game of rugby turned on its head once more with Ronan O’Heir catching well to attack the defence and offload to Clyde Regan who gave the Sligo side a lead again with O’Neill ensuring it was a three-point advantage the home side held going into the final five minutes.

Sean Keane put the game to bed as the clock ticked into the red as some ingenuity from Summerhill caught Garbally napping with Keane going over the line and O’Neill adding the extra points to take the bonus point away from Garbally with the last play of the game.

Summerhill go three from three in the group to top the table and can now sit back and watch on to see who they will host in the last four of the competition.

Garbally now need results to go their way to allow them to take hold of second place in their final fixture away to St. Muredach’s.