Get your copy of the
Leitrim GAA Club Championship
Souvenir Programme NOW
Every Club, Every Player, Every Game 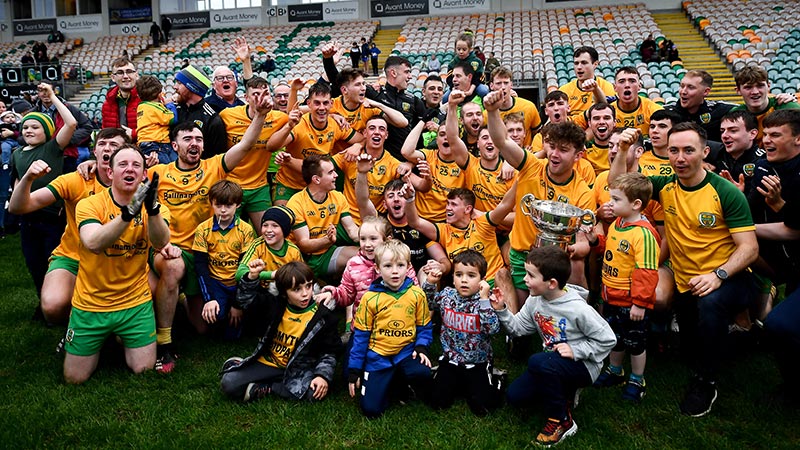 In a game that offered everything Leitrim Senior Champions Mohill were dethroned by a resiliant team performance from the underdogs who had a brilliant team goal finished by Niall McGovern and some top notch saves from goalkeeper Darren Maxwell as the inspiration to turn a second half deficit into a victory to secure the Fenagh Cup for the first time in 31 seasons.

When the final whistle blew on the 1991 County Final in Leitrim no one would have expected that county kingpins Ballinamore who had secured four victories from nine final appearances in the previous decade would be waiting thirty one years for their next title.

A fine team display from the eventual champions included two top drawer saves from Darren Maxwell, solid defending from his defensive unit, the playmaking of Wayne McKeon, the strong running of the McGovern brothers, Luke Murphy's consistency from dead balls and a fine scoring cameo from Tom Prior in front of the new Leitrim manager Andy Moran.

Defending champions Mohill who had been untouchable in the early stages of the championship had been hotly fancied coming into this decider. They produced an impressive display of shooting from distance led by their talisman Keith Beirne ably assisted by Keith Keegan and Jordan Reynolds.

The underdogs started brightly with two points on the board before the first minute was out. A Luke Murphy free and Paddy Connaughton effort setting the pace for an entire encounter that wouldn't disappoint.

Mohill sharp shooters Jordan Reynolds and Keith Beirne opened their accounts with two impressive points to level matters, the first of many times the sides would be drawn level throughout the game.

Shane Moran and Luke Murphy added scores for Ballinamore before that lead was halved by Beirne with another fine effort from long range.

Sean O'Heslins could have found the back of the net but a precision shoulder challenge from David Mitchell on Niall McGovern snuffed out the danger.

Wayne McKeon and Beirne swapped scores before Jordan Reynolds broke through on goal and forced a fine save out of Darren Maxwell. Less than a minute later he was called into action again, a Mohill attack saw him forced to parry a shot from Keith Keegan.

Sean Harkin got in on the long range scoring act for Mohill to give Mohill the lead for the first time in the encounter. Once again within a minute Ballinamore were level through a Wayne McKeon effort.

The challengers took the lead through Michael McKiernan after Mohill lost a free after Keegan reacted to winning a few with a push on Shane Moran and the resulting throw in broke on the Ballinamore side.

Once again the lead changed hands with two scores for Mohill from Beirne (45') and Evan Harkin.

In a display that will have impressed Moran in the stands Tom Prior popped up with his first score for the Ballinamore team before Beirne lands another score from just inside the 45' metre line.

Wayne McKeon and Shane Quinn swap scores to leave the defending champions a point ahead at the interval. 0-10 to 0-9.

The start of the second half gave an indication of what was to come. A ball in from Dean McGovern dropped at the feet of Tom Prior who was upended in the Mohill penalty box. Gareth Foley waved away the protests before the ball broke down the other end of the pitch.

Sean Harkin engineered a shooting chance and his low powerful effort brought out a fantastic save from Darren Maxwell as the Ballinamore netminder forced the ball around the base of the post.

Wayne McKeon and Keith Beirne (2) each added to their personal tallies but a Keith Keegan point put Mohill ahead by three points with twenty minutes left to play as it appeared that Mohill would repeat their Semi Final performance and find another gear to seal the victory.

Tom Prior and Keith Beirne both once again raised white flags before Luke Murphy drew Mohill's lead back to a two point gap.

After the second half water break a dozen minutes or so on the clock Shane Moran made a break and split the posts to reduce the deficit further and ensure a grandstand finish to the game.

Ballinamore really started to take control of the game as Senan Harte levelled matters to finish off a fine Sean O'Heslins move with McKeon stepping up to push his side ahead moment later from a free kick.

The defining moment of the game arrived with four minutes left on the clock as a quick fire attack found it's way from Luke Murphy to Dean McGovern who played his brother in an he coolly finished the ball to the bottom corner of Padraig Tighe's net to put O'Heslins four points ahead.

The celebrations were in full flow moments later when Gareth Foley's whistle brought an end to 31 years without senior glory for the club who lead Leitrim's Senior Roll of Honour.

Listen back to each half of the Leitrim GAA Championship Final between Ballinamore Sean O'Heslins and Mohill. Commentary from: Derek Kelleher with former Mohill Championship winning manager Padraic Davis