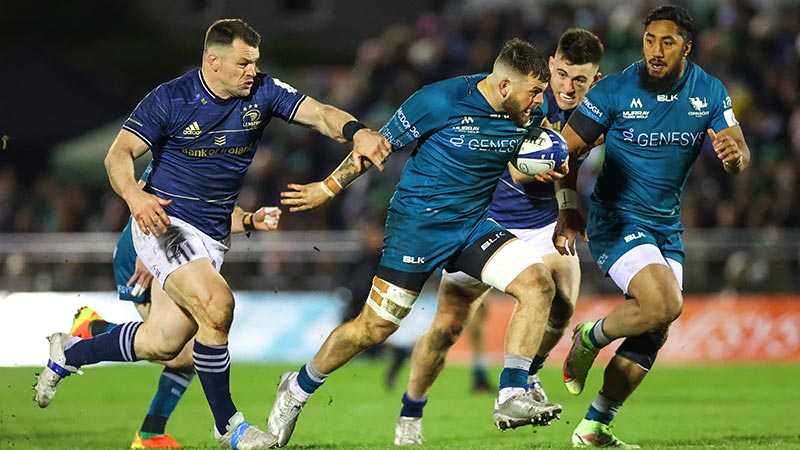 Tries from Lowe and a second half effort from Hugo Keenan earned Leinster their fourth straight win against Connacht in Galway and ensured Leinster take a five point lead into the reverse leg next Friday.

Leinster have dominated this fixture in recent years as they have earned their eighth win in their past nine against Connacht, and won their previous encounter by 37 points.

However, Connacht in their first ever Champions Cup knockout game were much improved from their previous outing against Leinster, and produced an inspired display to leave next weekend’s tie evenly poised.

The hosts were left up against it in the first half as Leinster took an 8-18 lead, before Connacht fought back to restrict Leo Cullen’s team to just eight points in the final 53 minutes of the game.

Connacht started the game strongly as John Porch raced in for the opening try of the game, after just two minutes on the clock.

Leinster looked for an immediate response, but struggled to break down a fired up Connacht defensive line, but soon made inroads as a  Johnny Sexton penalty reduced the deficit to 7-3 minutes later.

However, Cullen’s men, who had scored a whopping 153 points in their last four games, couldn’t be denied as Lowe raced in for his first score of the evening.

Lowe quickly became the star of the show as he finished off another free flowing attacking move to add his second within four minutes to make it 5-15.

Connacht quickly made their way back into the match as Jack Carty slotted over a penalty, before Sexton quickly cancelled it out to make it 8-18.

Andy Friend’s men quickly clicked into second gear as Carty added two quick penalties either side of halftime to make it 14-18.

Lowe looked to have wrapped up his third try minutes later, but saw his effort chalked off thanks to a knock on from Luke McGrath in the build-up.

However, Leinster weren’t to be deterred as Keenan crashed over to send Leinster into a 14-23 lead, before Jameson Gibson-Park was yellow carded following a high tackle on Kieran Marmion.

Connacht capitalised on the numerical advantage as Salesi Fifita burrowed his way over for the visitors second try of the game. Carty nailed the conversion to make it 21-23, but that proved to be as close as it got as Ross Byrne iced the game at the death to send Leinster back home with a five point advantage.