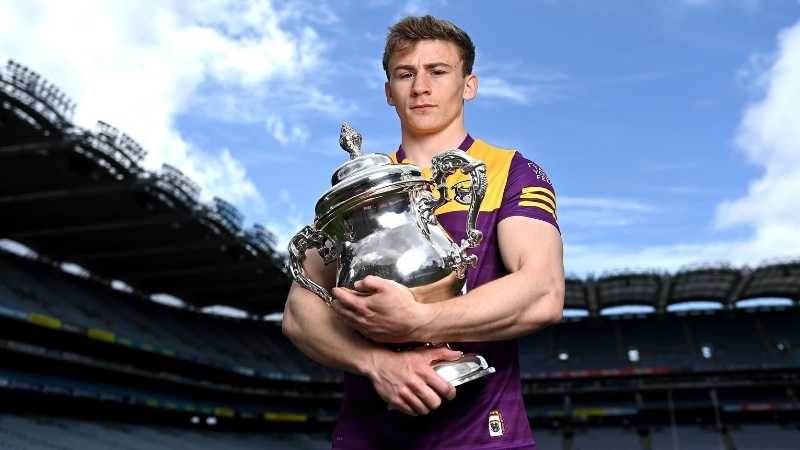 Wexford’s Martin O’Connor believes the Tailteann Cup can provide a springboard for his side to take the next step.

Speaking at the launch of the new competition Monday, O’Connor spoke about how he grew up watching an era of excellence for Wexford football.

“I was lucky enough to be playing underage football when Wexford was going really well so I had a lot of really good role models to look up to,” says Model skipper O’Connor.

“The likes of Colm Morris, David Murphy, Brian Malone, all these lads looking up to growing up. I always wanted to play football for Wexford.

“Obviously we would all love to be back there (when we were competing) in the ’08 semi final and the ’11 Leinster final. We’d love to be back to those days but realistically we are not quite there. I know we have had a huge turnover in players recently.

Whilst recent years have not been as successful for The Model County, O’Connor believes the Tailteann cup can be a decent stepping stone for Wexford to get back up there.

“We have potential to reach that level again and I think the Tailteann Cup is a great chance to bridge the gap from where we are now and where we want to bring Wexford football.

“Being named captain this year was one of my best achievements personally and it just makes me want to drive on even further for that then.

“To be fair there’s always been a good, strong Wexford football following. It is small there’s no doubt about it. Even in times when Wexford were going well, hurling was always the top supported, it was mainly lads going to that.

“But I think it’s up to ourselves to start performing and start getting results if you want to get that following.

“Obviously it helps when times are going bad if they get around us and show us that support that we will come on that bit more. But it’s completely up to ourselves, if we want that support we’ve got to start putting in the results and performances.”

When it comes to the immediate future, the Wexford captain is focused on Offaly, who Wexford play this weekend despite beating them a month ago.

“It’s just a month ago we played Offaly , to be fair the last day they had a good few injuries and I can imagine they will have a different team out last time so it might not be the same game.

“We were underdogs the last day and we might be favourites going in this time around so the the fact that we might have that behind us might not necessarily work in our favour but we know what we are capable of and we’ll take it as it comes we’ll bring our own confidence into the game and hopefully it will get the win.”

Aside from the potential springboard that the Tailteann provides them, O’Connor also believes that the young core Wexford have is key to any potential future success.

“Even in the Sigerson campaign, across the colleges there was a good Wexford contingent playing,” he says.

“Whereas for a while we maybe only had one or two people playing Sigerson every year, but the fact we have lads competing at that level without a doubt brings on those young lads because they get confidence from that.

“We might be lacking a bit of experience at the minute but we definitely have the talent. The more games we play, especially with this Tailteann Cup, if we get more and more championship games that’s only going to build our experience. It’s only to help improve, especially those younger lads who just want more game time.”

Wexford face Offaly in Bellefield at 2pm Sunday in their Tailteann Cup opener.