Ulster SFC: Monaghan withstand goal surge to ease past Down 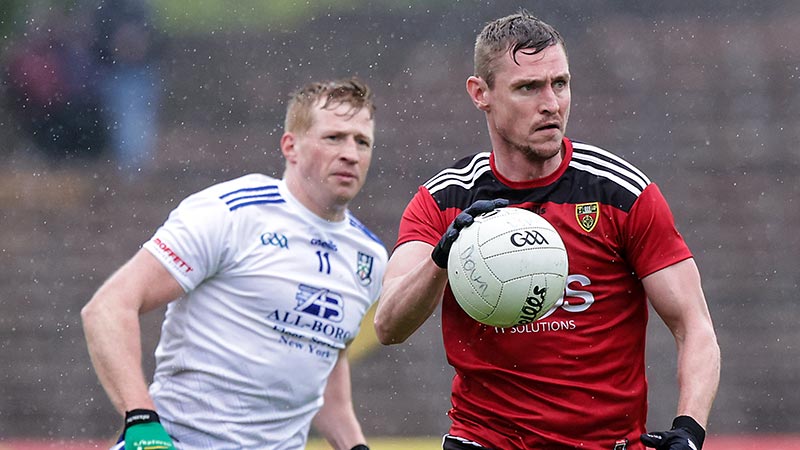 While the underdogs needed a good start, it was Monaghan who got it through a Rory Beggan free in the opening seconds.

Jack McCarron and Kieran Hughes tagged on another two to establish a three point lead in the opening 15 minutes. Pat Havern opened Down’s account in the 16th minute.

McCarron and Andrew Woods added two more after Conor McManus and Gary Mohan opened their accounts. Andrew Gilmore’s free made it 0-9 to 0-2 before having to go off through injury.

Monaghan stayed in control of the game with McCarron to the fore once more and got four points in total in the first half to open up a 0-12 to 0-4 before everything changed on the stroke of half-time.

Conor Poland grabbed a much-needed score before Caolan Mooney shimmied past the Monaghan defence before drilling a low shot into the corner, rattling Rory Beggan’s net. 0-12 to 1-4 at the break.

Down started how they finished the first half when Pat Havern got a goal straight from the throw in to put two between the sides.

Monaghan regained control of the match through points from Gary Mohan, McManus and McCarron to give them a 0-16 to 2-4.

Both sides traded points to leave it at 0-18 to 2-5 heading into the final quarter which Monaghan duly controlled. Conor McManus added three points in quick succession to increase the gap to ten with ten remaining.

Barry O’Hagan and McCarron traded frees to leave 0-22 to 2-6 heading into the final minutes.

Tiernan Rush added a free for Down but was sent off moments later for a second yellow after a high tackle on Karl O’Connell.

Overall a comfortable victory for Monaghan on a wet day in Clones. Banty McEneaney’s side will face either Tyrone or Derry in the last four.