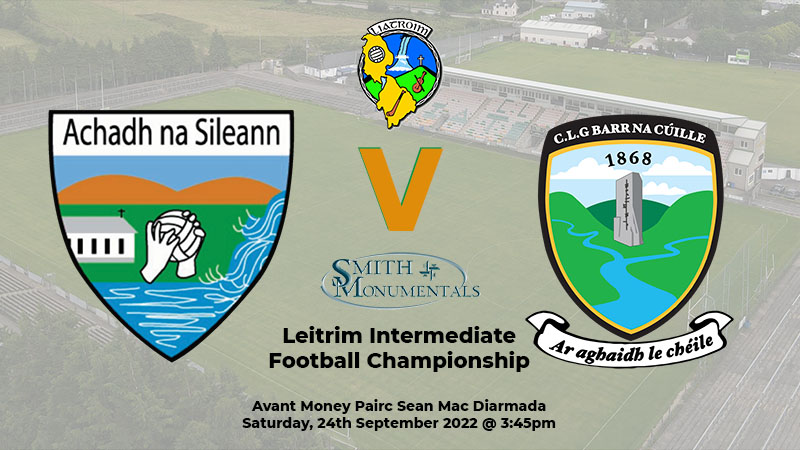 Aughnasheelin marched into the semi-finals of the Smith Monumentals Intermediate Football Championship with a comprehensive thirteen- point victory over Bornacoola in Avant Money Pairc Seán MacDiarmada on Saturday, running out winners by 3-10 to 0-06.

The game was over as a contest just seven minutes into the second-half as Aughnasheelin had built up a cushion of thirteen points, leading by 2-09 to 0-02 at that stage with the goals coming from Fintan Fitzpatrick and Brendan Mulvey.

The victors scored the first two points of the match courtesy of Ciaran Cullen and Darragh Gunn before Ronan Mulligan responded with a ninth minute free for the Bors.

Fintan Fitzpatrick then reeled of 1-02 in the space of six minutes, adding two points from frees, and then rattling the Bornacoola net on nineteen minutes when rifling past opposition keeper Daniel Farrell in a one-on-one scenario with the Bors stopper.

Joe Earley and Fitzpatrick again with another free added further points for Aughnasheelin, while Ronan Mulligan’s second free just before half-time left eight points between the sides at the interval, as Aughnasheelin were ahead by 1-07 to 0-02.

Five minutes into the second half, Brendan Murray scored Aughnasheelin’s second goal when finishing off a fine move after receiving a superb pass from the impressive Ciaran Cullen. Fitzpatrick then added his fourth and fifth points of the match to give the victors a 2-09 to 0-02 cushion with just seven minutes of the second half elapsed.

Bornacoola rallied briefly to fire over the next two scores, the first, a free from keeper Daniel Farrell, and then their first point from play which came from the boot of Sean O’Riordan.

Mulvey and Mallon then swapped points which meant that Aughnasheelin were still in cruise control, leading by 2-10 to 0-05 with the game moving into stoppage time.

Aughnasheelin scored their third and final goal in the first minute of added time when Joe Earley went on a brilliant diagonal run from the left and his attempted hand pass to Mulvey was diverted into his own net by Bornacoola defender David Mulligan.

Cian Mallon concluded the scoring with a late consolation point for the losers.

Aughnasheelin will take on Kiltubrid in the last four, while Annaduff and Allen Gaels will clash in the other semi-final.