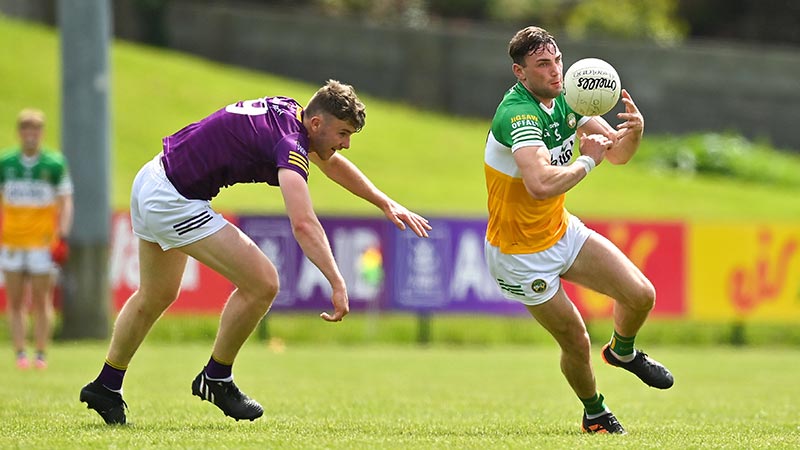 Offaly defeated Wexford by one point in an entertaining and tightly contested game that sees them advance to the next round of the Tailteann Cup.

The game was even but you felt Offaly’s quality going forward would eventually see them take a slender win and that’s how it played out. Goals from Diarmuid Egan, Lee Pearson and Niall McNamee would prove decisive.

Mcnamee who scored 1-5, scored the pivotal goal for the Faithfuls after 53 minutes. Wexford battled to the end and only missed out by a point, as Ben Brosnan once again did all he could for the Yellowbellies.

John Maughan’s side have pencilled in a meeting with Wicklow in the next round after just getting over the line today in Enniscorthy. A strong offensive Wexford performance pushed Offaly all the way and it took the extra goal to see them through, as they won 3-11 to 2-13 in Bellefield.

The score line never went further than a four point deficit and things could have gone either way. The favourites and visitors were the more threatening as expected, but some poor wides from them in the first-half combined with the fact that the Model County’s big names showed up made this a very tight affair.

Ben Brosnan’s game started with no surprises as he kicked two early points but Diarmuid Egan hit the net after 12 minutes to get Offaly ticking. Dylan Furlong responded with a goal soon after for Shane Roche’s team and the rest of the half continued to ebb and flow as an even contest.

Despite being ahead at numerous points in the half, the away team were sloppy and missed a lot of wides, Niall McNamee and Keith O’Neill with two particular shockers. Nonetheless they kicked over enough to lead 1-7 to 1-5 at the interval with points from McNamee, Anton Sullivan and Johnny Maloney.

Into the second period, the team once again took turns at scoring goals. Lee Pearson scored from corner back and Offaly started to multiply their scorers as Bill Carroll and Niall Darby kicked over. Just when it looked like the travelling team could pull away Wexford replied with points from Niall Hughes and sub Mark Rossiter.

Hughes then fisted in a dropping ball right at the goal-line and everything was back in the balance. At this stage Niall McNamee was fully in his rhythm and built towards the five points he would have at the final whistle. He also scored the vital third goal which was all that separated the sides for a decent spell.

It would also be what decided the game as late Wexford scores from Kevin O’Grady and Donal Shanley couldn’t prevent a single point loss.