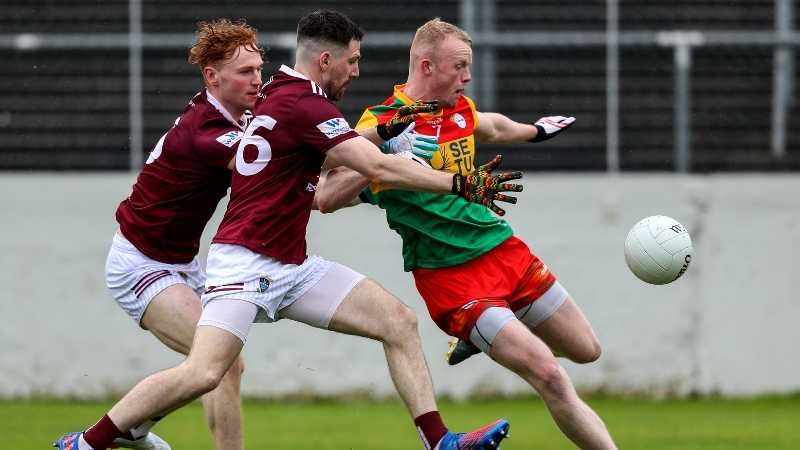 Westmeath advanced to the Semi Finals of the Tailteann Cup, as they weathered the storm of Carlow, to come out five point winners at Netwatch Cullen Park.

John Heslin continues to be the leader for The Lake County, his 1-9 crucial to their success this afternoon, as they battled a valiant Carlow team, coming out on a score line of 1-21 to 2-13

They now go into the drum for tomorrow morning's draw to determine the seedings for the Semi Finals, Carlow will be disappointed as they played well to keep up with a strong free-flowing Westmeath outfit.

It was the visitors who looked strong in the opening half, building a healthy lead early on but Carlow showed real determination and vigour to hit the net twice in the half, to leave it a two point game at the interval, Darragh Foley causing issues inside the square.

Westmeath looked comfortable in the early exchanges of the tie, establishing a 0-3 to no score load after six minutes, three different scorers waving the white flag, before Foley had Carlow on the board after 12 minutes.

Sam Duncan cancelled out Foley’s effort with a point of his own, before Josh Heslin rose high to gather a long ball he made no mistake and fired to the net, Westmeath ahead 1-4 to 0-1 after 14 minutes.

Carlow would respond with a goal of their own with Josh Moore raising the green flag as he goaled in the 17th minute, but two Heslin points shortly after kept Westmeath ahead by five points.

Conor Doyle kicked only the second Carlow point after 23 minutes to keep them within four, but Heslin and Luke Loughlin were accurate to make it 1-8 to 1-2 after 27 minutes. Three quickfire points for Carlow had them within three of The Lake County, but just before the break Heskin and Loughlin chipped in again with scores, as they looked comfortable five points to the good.

Into additional time Carlow hit a lifeline, midfielder Niall Hickey converting from close range, as they would go into the break behind by two points, 2-5 to 1-10 as they remained in the tie despite earlier in the half it was beginning to look academic for Westmeath.

The second half began like the first Westmeath hitting three scores in a row, before Carlow could reply with a point of their own, Colm Hulton adding a second just minutes later but they still were behind.

Heslin and Foley kicked two free’s to cancel the other out, as the teams began to exchange scores in an end to end game, despite the poor conditions it was heating up, Westmeath ahead 1-17 to 2-11 after 58 minutes.

Heslin, Loughlin and Sam Cartan kicked three points in a row, Westmeath ending the half with a flurry of scores, as they pulled out a six point lead with four minutes left in the second half.

Jamie Clarke made it a five point game a minute into added time, but after Liam Roberts saw a straight red card, Heslin tapped over another free for his ninth point of the afternoon, despite Foley kicking his fifth of the day from another free seconds later, it was a consolation as Carlow could not hit the jugular late on.