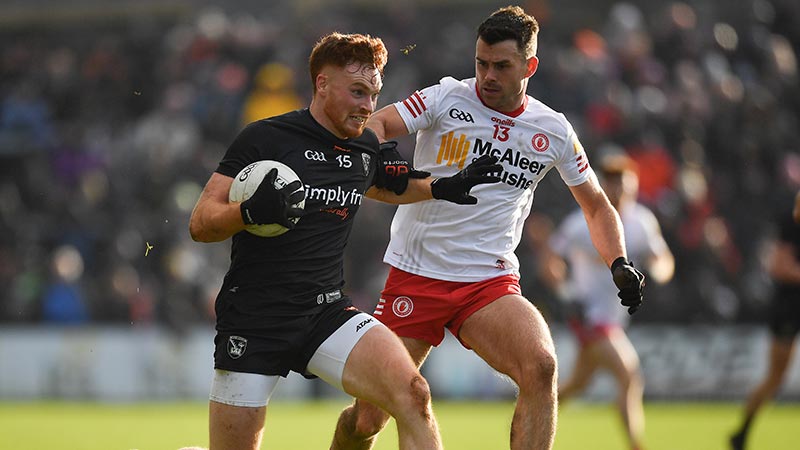 Armagh remain top of Division 1 in the Allianz Football League, following victory over Tyrone, Jack O’Connor picked up his first league win in his third stint as Kerry manager, vanquishing their old foes in a wet night in Tralee, Donegal and Mayo also build on their performances last weekend to secure their first wins of the season.

Kerry extended their unbeaten record in the league to 10, after a seven-point win over the Dubs in Tralee. David Clifford was the star man again for the Kingdom, despite missing a penalty the Fossa man scored four points, catching the eye with some super scores.

The Kingdom pulled out a ten point lead by the interval, Dublin failing to contest against the Kerry forward line, Dara Moynihan getting a goal for the home side, the only one of the contest after Dean Rock had one ruled out for a tackle in the build up.

Dessie Carrel’s men emerged for the second half rejuvenated, the Kingdom managing just a single score in the half as Paul Geaney hit the mark in the 46th minute, six points in a row cutting the gap down on a poor night weather wise in Tralee.

Armagh remain top of the division picking up back to back wins, with a six point margin of comfort against Ulster rivals Tyrone. A game which saw five red cards in the end, finishing with 14 against 11, all reds coming in the final minute of play.

The hosts started strong like the previous weekend, pulling out a 2-8 to 0-4 lead at half time. Greg McCabe and Jason Duffy both found the back of the net, Rian O’Neill kicking three points.

The All Ireland champions produced a better display after the interval, Cathal McShane pulled them within six at the death, the corner forward managing seven points all afternoon, with all coming in the second half.

Mayo left it late to secure victory over a game Monaghan this afternoon, Ryan O’Donoghue kicking a late point to give them a two point win. James Horan looked to have setup to right the wrongs from the previous weekend, with a well worked team display this afternoon.

The Ulstermen had led by a point at half time, 1-8 to 1-7, O'Donoghue netted early for the Westerners before Jack McCarrom raised the green flag with a well taken effort.

O’Donoghue led the line for Mayo, managing 1-6 for the afternoon, his scores bringing them close before Jason Doherty hammered home a second goal in the 51st minute, Conor McManus made it a one point game in the 69th minute with a free, but they failed to capitalise late on.

Donegal picked up their first win of the campaign with a 2-11 to 1-9 scoreline over Kildare in Ballybofey, Kildare unable to build on their performance from the previous weekend to get a win in the division.

Paddy McBrearty and Ryan McHugh both found the back of the net in the opening half, as they pulled out a 2-7 to 1-4 lead by the interval. Jimmy Hyland raising the green flag for the Lillywhites.

Into the second half both sides were low scoring, Conor O’Donnell, Michael Langan and Shane O'Donnell added to the hosts score over a 20 minute period. Kildare pushed on and looked to try to reduce the gap, they trailed by five before Jimmy Hyland pointed in injury time, his effort cancelled out minutes later by Langan.