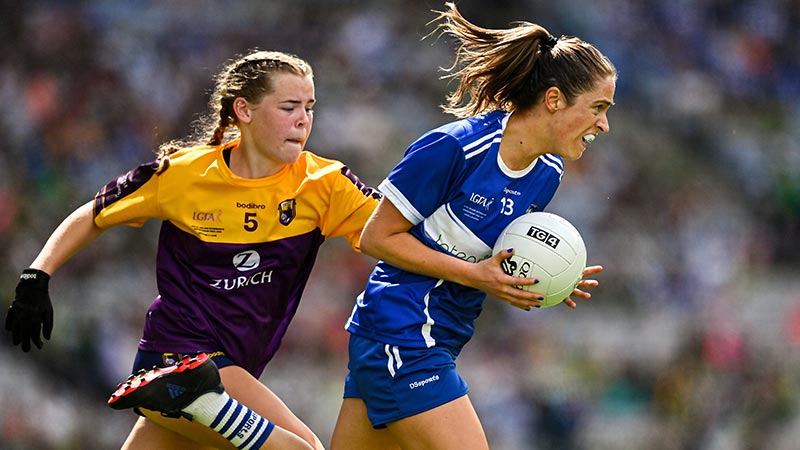 Laois are the 2022 TG4 Intermediate Ladies All Ireland winners, after an enthralling battle at Croke Park this afternoon.

Mo Nerney again starred for her county 1-5 to her tally all afternoon, their wide count makes for harrowing reading but they have got the job done nonetheless.

Wexford will rue missed opportunities as they have another heart break to end a head breaking year, back to back defeats in All Ireland finals while Laois now move to Senior.

Laois hit an early two point lead Eva Galvin and Laura Marie-Maher both pointing,Erone Fitzpatrick setup the first score but hit a shot of the post as a goal looked on the cards to further extend their lead.

Bernie Breen had the first major chance for Wexford after five minutes, her effort just drifting to the right and wide into Hill 16 end, they did score seconds later Catriona Murray feeding Ciara Donnelly she failed to keep her shot down for a goal, but their first point kept them in the tie early on.

Despite their early dominance of the game, Laois struggled in front of goal soon after, a string of wides looked to have knocked the confidence levels a tad, Mo Nerney did give them their first score in seven minutes with a well taken free, to lead 0-3 to 0-1 after 13 minutes.

Maher smelt blood after 15 minutes with a barging run through the Wexford defence, her effort went wide but she did have players in space to offload to, huge let off for Wexford as they struggled to break down a strong Laois defence.

Nerney game alive late in the second half, shortly after converting a free to extend their lead, she glided past the Wexford backline and fired into the net, 1-4 to 0-2 after 18 minutes.

Murray added a second score for Wexford to end their rut, Laois finished the half with a flurry five points in quick succession to lead 1-9 to 0-3 at the hooter.

Wexford came out the better early in the second half, three quick fire points saw them reduce the gap, Aoife Cullen had a goal chance that went wide after 38 minutes.

Laois again found themselves in a rut in front of the posts, Nurney and Anna Healy both added scores, but a string of wides left Wexford reduce their lead to 1-12 to 0-9 after 50 minutes.

The Laois wall became immovable in the last ten minutes, despite a late goal by Bernie Breen to blow the tie wide open followed by a Murray point from a free, Laois hung on, 21 years is a long wait but for they will savour this victory.