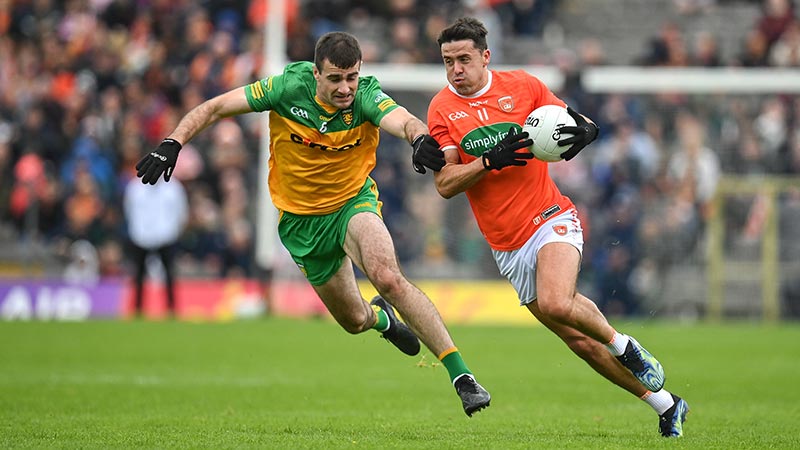 Armagh cruised into the quarter finals of the All Ireland in emphatic style after a 3-17 to 0-16 win over Donegal at Clones today.

Goals from Rory Grugan, Rian O'Neill and Stephen Sheridan was the difference between the sides as Kieran McGeeney's team continue to show impressive form heading into the final eight.

Armagh got off to the best possible start and hit the back of the net after just under 15 seconds. Rian O’Neill won the throw-in before finding Rory Gruggan with an inch perfect pass. Grugan turned expertly before smashing the ball into the top corner.

Armagh failed to kick on from here and struggled in retaining possession from their own kickouts.

Rory Grugan and Shane O’Donnell traded scores, as did Rian O’Neill and Ciaran Thompson in the following minutes. Thompson’s score for Donegal could have been the best of the half with a beautifully struck shot from outside the 45-yard line.

Armagh did find form again and when they played the ball in early to the likes of O’Neill, Duffy and Nugent, the Saffrons looked dangerous. Three points from their marksmen O’Neill and a cracker from Jarly Óg Burns brought Armagh back within touching distance of the side who knocked them out of the Ulster SFC.

On the half hour mark, the game turned in favour of Kieran McGeeney’s side after Donegal goalkeeper Shaun Patton dragged Aidan Nugent down inside the square. After consulting with his umpires, the referee awarded a penalty to Armagh and showed the Donegal number 1 a black card for his challenge.

Caolan McGonagle stood between the posts for the penalty, but Rian O’Neill blasted the ball home for his side’s second goal of the half. Jason Duffy and Rory Gruggan added another couple of points for Armagh before Michael Murphy’s free just before the interval sent his team into the changing rooms trailing 2-8 to 0-10.

Jarly Óg Burns got the first score of the second half before three more points from Rian O’Neill and a point from Stefan Campbell extended Armagh’s lead.

Michael Murphy and Jason McGee added points for Donegal, but Armagh put the nail in the coffin when Stephen Sheridan finished from close range for his side’s third goal of the game.

Murphy continued to try and claw back scores for Donegal but Conor Turbitt’s two points off the bench as well as Rory Grugan and Jarly Óg Burns’ third points of the afternoon continued to keep their side’s tally ticking over.

The Saffrons will certainly fancy their chances against any side left in the competition after knocking both Donegal and Tyrone out in the past week.